To develop a public policy program reflecting the teachings and values of our tradition has been the goal of the World Affairs Team.  Conservative Judaism’s fundamental commitment to Zion; classical Jewish texts on issues of social justice, human rights, concern for the poor, hungry, homeless and the stranger; as advocates on behalf of Israel and in support of those programs which have benefitted mankind, all of these have motivated and directed Women’s League’s activities in World Affairs.

A survey of the body of Resolutions adopted by delegates assembled at Women’s League Conventions or through sessions online reveal a broad spectrum of issues that challenged the minds and hearts of our members.  Heeding Rabbinic teachings regarding tikkun olam, it is clear that our members have been assertive in addressing current issues such as racism, poverty, hunger, health care, violence, pollution and immigration.

The earliest resolution, adopted in 1950, was on Civil Liberties (followed by many others) which forcefully called for a federal anti-poll tax law, Fair Employment Practice Act, and a Federal anti-lynch bill.  Over the decades these resolutions have been concerned with the anti-Communist hysteria of the 50’s, desegregation of public schools, separation of church and state, rejection of capital punishment, immigration, the environment, the feminist revolution, the ordination of women, advocacy for Jews in Ethiopia and the Soviet Union, prosecution of Nazi criminals, support of Israel, apartheid, women’s and abortion rights – just to name a few.

These adopted resolutions were publicized to our affiliates and members to serve as the authority to act and advocate for these issues publicly. Women’s League and its affiliates and members could take positions because that was the position that the organization had adopted.  The thousands of women throughout the decades who have participated in the process of drafting and adopting resolutions have taken seriously the teachings of our tradition.  They have not removed themselves from the community, but assumed the yoke of leadership.

During the last half of the 20th Century, Women’s League demonstrated commitment to social action by holding Social Action Conferences.  One of the first Conferences featured discussions on topics ranging from Separation of Church and State to Civil Rights, Federal Aid to Public Schools, and the role of the United Nations.

Under Bernice Balter’s direction, in 1987 the event evolved into the first biennial World Affairs Conference held in Washington, D.C. during which the attendees interacted with various arms of the government.   The Conference lasted for two and a half days and might include sessions at the Congress, Pentagon, State Department, and National Institute of Health where we were instrumental in launching the Women’s Health Initiative.  We also enjoyed kosher meals either at a local synagogue or an embassy, many of which were held at the Israeli Embassy.  One of the most interesting meals was at the German Embassy.  After sessions with the Congress, time would be allotted to visit and lobby with senators or representatives.  Although well-attended (100-150), the costs became prohibitive.  The last World Affairs Conference was held in 1999.

Since 1952, Women’s League has been an accredited nongovernmental observer at the United Nations and a participant in the caucuses of religious organizations and of the organized Jewish community.  Women’s League passes resolutions supporting those U.N. programs that were effective in enhancing the human condition around the world: human rights, Genocide Convention, disarmament, ecology, UNICEF, world hunger and the protection of children, women, homeless and displaced.  Women’s League also called for reform and restructuring of the United Nations, decrying its anti-West posture in the 70’s and 80’s and calling for a return to the ideals of its charter.

Each year NGO representatives are invited to attend the opening sessions of the General Assembly to hear member nations’ heads of state.

Women’s League for Conservative Judaism is one of approximately 50 Jewish Non-Governmental Organizations at the United Nations, participating in the Jewish caucus which concerns itself with human rights and Israel affairs. The Jewish caucus collaborates closely with the Israeli Mission, as well as other UN ambassadors and leaders from countries friendly with Israel.

Our representatives have participated in the Holocaust Remembrance Day held in the halls of the General Assembly and attended meetings at Touro College to commemorate the Holocaust.  In addition, they have arranged guided tours of the United Nations for our affiliates and regions. 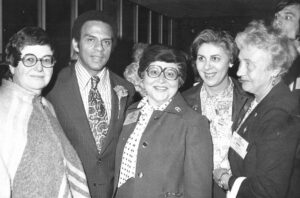 Women’s League NGOs with US Ambassador to the United Nations, Andrew Young (1978)