The Women’s League Megillah was commissioned in 2014, the initiative of then President Rita L. Wertlieb.  The scroll was written and decorated by Rabbi Hannah Klebansky, one of the first women to serve as a sofer, or scribe.  Rabbi Klebansky, who made Aliyah from Russia as a young girl, is a member of the Rabbinical Assembly.

The scroll is a Hamelech megillah, meaning that the word hamelech (the king) is the first word of each column.  The megillah’s illustrations incorporate the Women’s League logo, as well.

The olivewood megillah case was created by the Iranian-born Israeli artist Sara Tamir.

The project culminated with a beautiful Megillat Esther to be shared among the regions and sisterhoods as an incentive to study and address some of the story’s intriguing issues as well as to revisit an ancient tale through contemporary eyes.  A total of $33,000 was raised to support Women’s League initiatives. 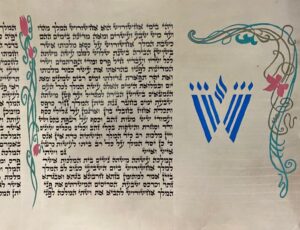 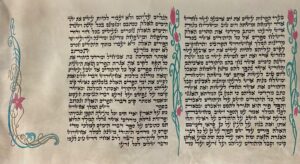