Over the years Janet increased her involvement and responsibilities in Women’s League and from 1998-2002 served as Women’s League’s international president. In March of 1999, the Executive Committee of Women’s League passed a motion to allocate $65,000 000 over a period of three years to fund the Torah Project. The money would be used to hire a scribe to write the Torah, for publicity, and programmatic educational materials.

The campaign officially began just prior to the holiday of Shavuot when each member received information and was urged to fulfill the 613th commandment, “to write for yourselves this song and teach it to the children of Israel.” Naming opportunities were available for the 5 books, each parsha, each haftorah, a verse, a word or a letter. On December 11, 2000, during the Women’s League convention in Philadelphia, the scribe came and the women were able to use him as their shaliach to write in the Torah.

During the Mitzvat Torah campaign almost $250,000 was raised. Besides the Torah, a mantle and ark suitable for travel were purchased. The remaining funds were invested.  The annual income from those investments is used for educational and/or leadership activities. 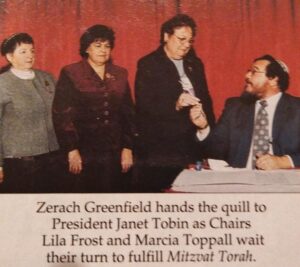 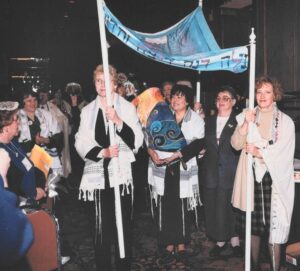 Presentation of Sefer Torah to the Jewish Theological Seminary (January 2003) 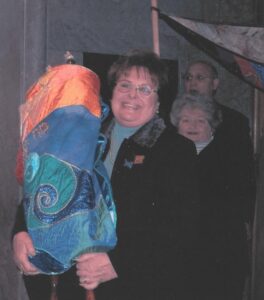