You are here: Home » Women’s League Convention 2017 » Meet the President 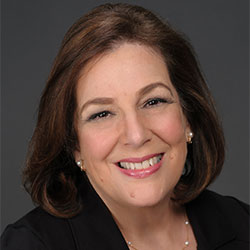 Margie Miller is not one to shirk from helping others; nor is she someone who feels restricted by “the way things are.” She has turned tragedy into a lifelong commitment to helping others, and she sees possibilities where others see limitations. These are just two of the skills that make her a perfect Women’s League president who promises to wake us up to face a fabulous tomorrow!

A native Long Islander, Margie grew up in Valley Stream, NY. Active in Jewish life since she was a teenager in BBG, she became an adult bat mitzvah in 1997 and retired not long ago from a 16-year career as a Hebrew school teacher at three local synagogues. She graduated from Hofstra University in 1971, with a double major in sociology and psychology.

Margie and her first husband, Charlie Sivin, z”l, were active in the Baldwin Jewish Center, where she served as president of the Mr. and Mrs. Club, then as sisterhood president and ultimately, as the first woman president of the congregation. Considering that the synagogue was, and continues to be, traditional and non-egalitarian, this was a huge achievement.

Her second husband, Joel Miller, z”l, was killed in the World Trade Center on September 11, 2001. Although Margie had a real estate broker’s license, she worked full time as a family bereavement specialist for South Nassau Communities Hospital’s WTC Family Center. From 2002 to 2008 she coordinated family outreach and programming for 9/11 bereaved and first responders’ families.

With all that, Margie made time to serve in multiple capacities on her Women’s League branch and region boards, and finally, on the international board, where she chaired the training department and eventually the 2014 convention.

She embodies the model of problem-solver, having had to do so herself so often. She is the classic lemons-turned-into-lemonade person. For help in solving a problem – or for just a warm hug – everyone can turn to Margie.

Margie believes that Women’s League should inspire its members to embrace Jewish values – particularly by strengthening their commitment to service, ritual and Israel. She not only says it. She has shown it by embracing her role as lead trainer at 16 Leadership Institutes; creating the curriculum for, and training, the first cohorts of area support vice presidents and region advisors. She has been the trainer or consultant for over 100 sisterhoods, conference consultant for 11 regions, and  a region conference consultant since 2002.

She says, “I believe that Women’s League is a community of women, bound together by these values, interests and concern for the world around us. To accomplish our goals, we must create a culture of inclusiveness, where our members’ voices are valued. Members at all levels (individual, sisterhood and regions) should have access to leadership opportunities for personal growth and within the organization. I believe in expanding our team structure and maximizing direct access among our members, lay and professional leaders. To commit ourselves to great customer service, we must be responsive to the needs of our members and be proactive in our efforts.”

In her role as Women’s League president, Margie plans to address the areas of finance, membership, branding, programs, and organizational structure. She considers herself “a true believer in building to our strengths,” and hopes to “set a progressive path toward the next 100 years of our beloved organization.”