You are here: Home » Resources » For Members & Friends » Seasonal Materials to Enhance Your Holiday and Home Celebrations » The New Ushpizot: Planting a Vineyard

The New Ushpizot: Planting a Vineyard

One of the main blessings that have resulted from the rise of Jewish feminism is the development of meaningful and creative women’s rituals. Shabbat morning bat mitzvah services, naming ceremonies for baby girls, rosh chodesh prayer groups, and women’s seders are just a few ritu-als that have been created in the past 40 years or so and have become so culturally entrenched that we tend to forget their newness. And each year, women make Jewish holiday observances and rites of passage more meaningful to highlight their voices and experiences.

Sukkot, one of the principal holidays on the Jewish calendar, is a case in point. Many of the Sukkot mitzvot are observed equally by men and women, such as waving a lulav and etrog and gathering and eating in the sukkah. Recently, Sukkot’s unique tradition of inviting Ushpizin (imagined guests) into the sukkah has also been subjected to scrutiny and interpretation.

Ushpizin, ?rst mentioned in the Zohar (Emor 103b-104a) and later by Isaac Luria in 16th century Safed, are seven biblical personalities: Abraham, Isaac, Jacob, Moses, Aaron, Joseph, and David. According to kabbalistic thought, on each night of the holiday one of these ancient ?gures was selected to bring to the sukkah a particular gift associated with the mysti-cal qualities of God (sefirot).

Ushpizot: Inviting the Women In

Modern Jewish thinkers have re-imagined this custom to include inviting women, together with the men, as honored guests. There are different opinions about which women to include. One of the earliest actually was suggested by the 17th century kabbalist Menachem Azariah da Fano, who suggested adding the seven women listed in the Talmud as prophetesses: Sarah, Miriam, Deborah, Hannah, Abigail, Huldah, and Esther. The Rabbinical Assembly’s 2003 siddur includes a slightly different list: Sarah, Rebecca, Leah, Rachel, Miriam, Deborah, and Ruth.

At this time of year, Women’s League and Torah Fund are ushering in a new programmatic theme, taken from Eishet Chayil: Nat’ah karem – She plants a vine-yard. In honor of the theme, we have created a new selection of Ushpizot, focusing on accomplished women whose work not only benefited their contemporaries, but will certainly impact generations to come. These “planters” come from many walks of life – politics, scholarship, science, and the arts – but the common theme is the endurance of their contributions. How better to acknowledge the pivotal roles of Women’s League and Torah Fund in our institutional histories than to celebrate women of vision and accomplishment, inviting them as honored guests into our sukkot? 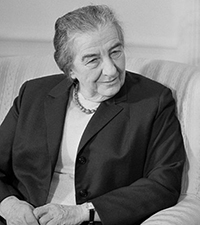 Self-defined as a Jew, a Zionist and an Israeli, Israel’s prime minister from 1969-1974 dedicated her adult life to defending and preserving the security of Israel. She was a complicated mix of compassion and toughness. Early in her career, Meir occupied many in?uential cabinet positions, helping to shape the young state’s far-reaching foreign and domestic policies. She was prime minister when Israel was attacked on Yom Kippur, 1973. The army suffered a large number of casualties, a devastating blow for families and military alike, and until her death, Meir regretted heeding the advice of her military command not to mobilize the reserves earlier. Also while prime minister, Meir authorized teams of covert operatives to hunt down and execute the masterminds of the 1972 Olympic massacre in Munich. While her gender was often an impediment to acceptance and promotion, Golda Meir never focused on what we might call “women’s issues.” 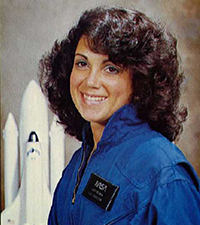 Daughter of Ukrainian immigrants, Resnick was devoted to science, engineering and eventually to the United States space pro-gram. After she was awarded a doctorate in electrical engineering, she joined the Laboratory of Neurophysiology at the National Institutes of Health (NIH) as a biomedical engineer. Later, from a pool of 8,000 applicants, she was one of 35 accepted by NASA, only six of whom were women. Resnick’s ?rst successful space mission was on the orbiter Discovery, but she later died in the 1986 Challenger explosion. In addition to Resnick’s numerous scientific contributions, she has served as a hero to young girls, modeling and advocating for female participation in the sciences. 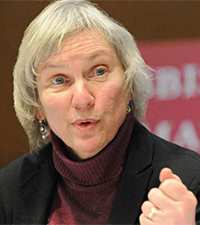 While the uncovering of women’s place in history is part of contemporary feminist consciousness, it was unheard of when Paula Hyman wrote her doctoral dissertation on French Jewry in 1975. Today, the hallmark of Hyman’s scholarly contribution is her recovery of women’s voices and experiences, lending richness and completeness to our understanding of the Jewish past. As a founding member of Ezrat Nashim, in 1972 she and her colleagues petitioned the Rabbinical Assembly for women’s full equality and participation in synagogue life. Her academic career began at JTS where she was appointed the first female dean of the Seminary College of Jewish Studies; in 1986 Hyman moved to Yale where she served as Lucy G. Moses Professor of Modern Jewish History until her death in 2011. Paula Hyman’s work and spirit remain an enduring legacy to our more complete understanding of women’s roles in history, in Jewish ritual practice and Jewish identity. 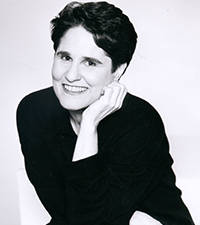 Mi shebeirach avoteinu… Mi she-beirach imoteinu – Bless those in need of healing with refuah shleimah the renewal of body, the renewal of spirit and let us say “Amen”

Starting out as a song leader in Jewish summer camps, Debbie Friedman’s music transformed prayer in synagogues throughout the world, drawing people together no matter their affiliation. Friedman’s songs blend lush melodies and biblical passages. A charismatic per-former, she played to sell out audiences, including at Carnegie Hall. At one time, she served as a cantor and was appointed to the faculty of Hebrew Union College Jewish Institute of Religion’s School of Sacred Music in New York where she remained until her untimely death in 2011, when the school was renamed in her honor. So familiar and entrenched is Friedman’s music that many no longer recall what came before it. In other words, for many it has become traditional. 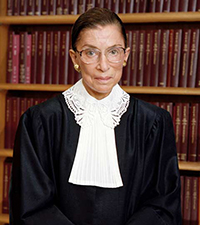 As the second woman to be appointed to the United States Supreme Court, Ruth Bader Ginsburg has championed liberal causes throughout her career, including racial and gender equality. Upon graduation from Columbia Law School, because of gender bias in New York law firms in the 1950s, the gifted young graduate did not receive a single job offer. Later, while teaching at Rutgers Law School, she was forced to conceal her pregnancy or risk losing her position. So throughout a legal career spanning more than half a century, Ginsburg’s consistent voice and rulings against gender discrimination in the work place have helped transform the American legal system. Women owe a tremendous debt of gratitude to her vigilance in such matters as prohibitions against sexual harassment, unfair employment practices and unequal employee benefits. 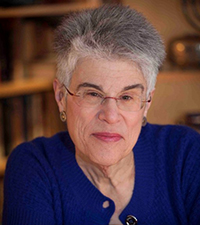 Judith Hauptman, the E. Bill Ivry Professor of Talmud and Rabbinic Culture at the Jewish Theological Seminary and a noted author, has taught thousands of students – graduate and undergraduate alike, rabbis, cantors and budding Jewish scholars. The ?rst female to be awarded a Ph.D. in Talmud at JTS (or any seminary or institution of higher learning throughout the world), she challenged that male-centric bastion of Jewish learning by entering – and excelling – in the exclusive male domain of Talmudic scholarship. Decades after receiving her Ph.D., Hauptman was ordained as a rabbi and in 2004 founded Ohel Ayalah, a free, walk-in High Holy Day service aimed at unaffiliated Jews in their 20s and 30s. To her fellow graduate students in the early 1970s Judith Hauptman was an oddity; for subsequent generations of rabbis and scholars, she is an institution. 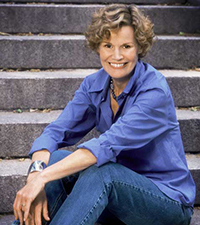 Bullying, teen sex, divorce, sibling rivalry, social ostracism, first love – these are but a few of the taboo topics that had never been addressed in children’s literature until Judy Blume began to write books for young readers. Her ground-breaking work, Are You There God? It’s Me, Margaret, was threatened with censorship, as were later works deemed unsuitable for young sensibilities. Nevertheless, Blume understood the need for the frank, sensitive treatment of subjects that bewildered her young readers. Her books are translated into dozens of languages and sales have reached beyond one hundred million copies. In 2004, she was awarded the National Book Foundation Medal for Distinguished Contribution to American Letters. Few will disagree that Judy Blume’s books help create future generations of thinking, caring adults.

So what to do with this new class of Ushpizot? Invite them into your sukkot this year. Celebrate these guests, celebrate their work – the planting of new ideas, methodologies and forms of knowledge. We are blessed with their contributions, which continue to guide and enrich us. Nat’ah karem. Planting, for the present or for the future – whether grapes or ideas, is an act of creativity, industry and often courage.