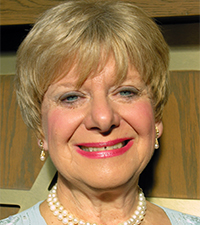 Canadian Randy Schwartz is a consummate volunteer who spent a large part of her volunteer training at Rosh Pina Synagogue in Winnipeg, which merged with two other synagogues and is now known as Congregation Etz Chayim.

As her sister, Denny Hornstein, said, “Randy has been an active Women’s League member with our congregation for many years… playing a role in the merger, not only in her capacity as a past branch president, but also with her commitment to the catering committee at Rosh Pina. She helped develop policies for the newly established Etz Chayim and is still involved.”

It was during her term as president of the Midwest Branch that Women’s League restructured its branches into regions. Randy and the other presidents had significant responsibilities in the restructuring process as well as in overseeing the sisterhoods in their regions. As transition chair Randy guided the successful merger of Midwest and Southwest Branches into the newly formed IntraContinental Region.

In addition to serving on the Women’s League board for over 14 years, being a region advisor and Women’s League trainer, Randy is a member of the board of directors of MERCAZ Canada, and she has worked as an administrative secretary at St. Boniface General Hospital in Winnipeg for 35 years! She certainly comes to her position as vice chair of Convention 2014, responsible for logistics, well trained.

As her sister added, “Randy is one of the most organized people I know. She sets her goals and always follows through – never lets anyone down. She is able to put together plans, strategies and goals and transmits her concepts while encouraging involvement and ideas from others. She is a very good team leader.

“I think Randy’s self-confidence is due to her involvement in Women’s League over the years. It has given her an outlet to really shine.”

It’s obvious to all, that if change is called for, and disparate groups are to be combined, Randy Schwartz will be there.