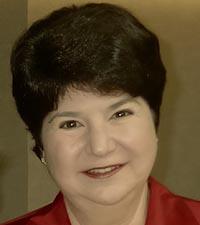 Phyllis Goldberg has been dedicated to Women’s League since becoming an adult bat mitzvah when she immediately was named education vice president of the Jacksonville Jewish Center Sisterhood! From there, it did not take long before she was a constant and admired presence in the Florida Region/Branch where she eventually became president. It is a real bonus for Women’s League to have Phyllis’ can-do attitude directed toward programming for Convention 2014.

In addition to her convention position, Phyllis is a Women’s League trainer and a member of the board of directors and Torah Fund cabinet. She has been a member of the executive committee, editor of the website, and a region mentor, among many other roles.

Throughout her sisterhood, region and Women’s League tenure, education has always been of paramount importance to Phyllis. A graduate of the University of Pennsylvania and Columbia University, her strong background in data processing and systems analysis, will come in handy in her convention position. She has already overseen the innovations of programming for a convention during the summer and over Shabbat.

Her friend and fellow Women’s League luminary Barbara Safer says, “Phyllis’ intellect and continuing thirst for education have driven her to expand her Jewish knowledge. Her personal life is one of commitment and involvement with Judaism and she has always had the strong support of her family.” Phyllis loves to read, create things on the computer, travel, and spoil her granddaughter. Larry, her husband of over 40 years, and two daughters all know how important family, Judaism, education, and Women’s League are to Phyllis. And we are all the better for it!