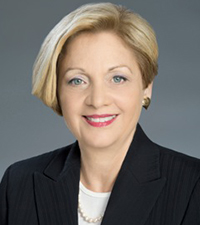 Women’s League is happy to introduce its first president from beyond “commuting distance” to its New York headquarters. Carol Simon’s sunny and upbeat personality matches the state she has called home for most of her life. Born in New York City, her family moved to Florida in 1964, first to North Palm Beach, and then to Miami, and now she lives in Tampa, Florida.

Carol attended Hebrew school and was the second bat mitzvah at Temple Beth El in Massapequa, NY, just before her family moved to North Palm Beach. Because of her involvement with USY, Carol persuaded her parents to join Temple Zion, in Miami. Temple Zion was the same synagogue where she eventually met her husband, Jeff, during the break at Yom Kippur services.

In 1971, Carol both received a bachelor’s degree in education from the University of South Florida and got married. She and Jeff moved to Ithaca, New York, for two years where she taught in the public schools. After moving back to Florida, she later received a master’s in early childhood education and taught at the Solomon Schechter Day School in Miami for 15 years. Today, she is responsible for marketing for Louis Wohl & Sons, Inc., a family-owned food service company.

Carol has always been involved in whichever synagogue the family belonged, and today she is a member at Congregation Rodeph Sholom in Tampa. Not surprisingly, she also has been involved on the Florida Region board for many years, serving as branch president in 1996-1998 and 1999-2000. A Women’s League trainer and region services chair, Carol has been an active member of the board for 14 years as consultant, affiliation activity chair, program chair, and vice president. She was on the Strategic Planning Committee and in 2008, she was convention chair. She is a Lomday Torah recipient from the Florida Branch of Women’s League Institute and is a graduate of the Melton Institute.

When asked about assuming the presidency, Carol said, “Becoming president of Women’s League was never something I aspired to; rather it was something that I began working toward as I went from sisterhood president, to region president, to being part of the board. Along that journey, I made friends and, more importantly, gained knowledge and skills that have made me who I am today. This was a slow journey, and it was only because of the women I met and worked with that I continued growing and challenging myself. And, this, my greatest challenge, is one that I am looking forward to because of the amazing group of women with me on the journey.”

Carol added, ”I see the challenges as opportunities. We need to strive to communicate with our members better; we need to keep up with the newest, latest and greatest methods, whatever that will look like in three years. We need to get our message out that we are here for all Conservative women, in synagogues across North America, and as individual members. We are here to network, to connect, so that we can learn from each other.

“Synagogues are closing around the country, yet the women are still there. We need to focus on them, encouraging them to continue be part of our network, so that our voices are heard. Who else cares about us as much as we do? Sharing the fabulous, creative materials and information we have with all of our members to keep them involved and to entice potential members is a great challenge.

But Carol sees the biggest challenge facing Women’s League in growing the membership and the opportunities to connect to each other. “Every Women’s League member is important, and by reaching out to them, we can embrace their ideas and put them into use, whether as individual members, in sisterhoods, in the region, or on the international level.

“We are also challenged geographically. But with the use of technology we can be vigilant and include women from all over. If you look at our incoming executive committee, you’ll see we are doing just that. We have members stretching east to west and north to south.

“Times are changing rapidly, and we must work hard to remain relevant. That means being willing to accept new ideas. But what a great opportunity! Our sisterhoods must be welcoming to all women, and help them find a place within their groups. Those women who are not in sisterhoods also must be able to find a home in the Conservative movement.”