“Antisemitic incidents are rising to unprecedented levels. We need a whole-of-government and whole-of-society approach to protecting Jewish communities at home and abroad,” said Jonathan A. Greenblatt, ADL CEO. “Our leaders must speak with moral clarity and take the lead in stopping antisemitism – and our COMBAT plan will empower advocates to partner with policymakers, stop violence and protect Jewish communities.”

The COMBAT plan is a comprehensive, six-part approach for federal, state, and local governments to fight domestic and global antisemitism. These elements are:

The COMBAT plan calls on leaders at every level of government to condemn antisemitism, authorize and improve hate crimes laws, stop the spread of antisemitism online and protect Jewish institutions often targeted by antisemitic acts.

ADL’s recent Audit of Antisemitic Incidents recorded 2,717 incidents of assault, harassment and vandalism across the United States in 2021. This represents the highest number of incidents on record since ADL began tracking antisemitic incidents in 1979 – an average of more than seven incidents per day and a 34-percent increase year over year.

The COMBAT plan is released as the organization’s Government Relations, Advocacy and Community Engagement (GRACE) team has increased more than three-fold. Under the leadership of ADL Vice President of GRACE Max Sevillia, the team includes new talent with backgrounds from federal and local governments, think tanks and other non-profit organizations.

Recently, ADL also announced a new Center for Antisemitism Research, which will deepen ADL’s understanding of antisemitism and help make the Jewish community safer. The Center will strengthen the organization’s research on antisemitism by sponsoring applied research fellowships and microgrant programs, funding experiments and evaluations that will engage some of the most innovative thinkers around the world, and establishing in-house strategic research that aims to gather data to ensure that ADL programs continue to be effective infighting antisemitism. 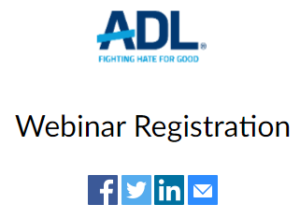 Friendly reminder that tomorrow, June 29 at 7pm ET, Tema Smith, Director of Jewish Outreach & Partnerships, will be hosting a Jewish community briefing on the Boston Mapping Project, which disturbingly was endorsed yesterday by US-designated terrorist organization, the PFLP. Tema will be joined by Robert Trestan, our New England Regional Director, Justin Finkelstein from ADL’s Center on Extremism, and US Attorney Rachael Rollins to discuss details of the Mapping Project and what it means for Jewish communities across the country. You can REGISTER HERE, and encourage you to share this link widely.