History: The very first Congress was opened in Basel, Switzerland on August 29, 1897. Every five years delegates from around the world gather together to discuss and decide about various Zionist issues. Through the years five institutions of the Jewish people were formed by the Congress. World Zionist Organization (WZO), JNF, Bank Leumi, Keren HaYesod and The Jewish Agency for Israel. Each of these institutions would be worthy of an entire article about why they were created, their mission and all of their accomplishments. I encourage each of you to become more familiar with these long standing Zionist Institutions.

Daily Schedule: For each of the three days there were many “greetings” made by notable Israeli politicians and leaders. We heard from Prime Minister Netanyahu, Benny Gantz, the former head of the Supreme Court, an IDF Officer, etc.
We spent hours discussing a variety of resolutions having to do mostly with Aliyah which was the theme of the convention. Resolutions of course become an exercise in wordsmithing to reflect the reasoning behind the suggested content and the general application of the resolutions. This year’s resolutions dealt with: Aliyah and Integration Terminology in the National Institutes, The Promotion of Aliyah, Hebrew language and Culture, Committee to recommend steps for inclusion of more voices within the Zionist Movement, The Unity of the Jewish People, Combating Anti-Zionism on Campus and Empowering the Council of World Zionist Youth Movements and their Hagshama Movements.

Delegation: After extensive voting for the various platforms of Zionist organizations throughout the world, 521 Elected Delegates were selected. I was an “official” voting delegate assigned from all of us voting for Mercaz. (Our WLCJ members, Marilyn Wind who is the President of Mercaz was a Delegate as was our member Mary Sanders). Other non-voting “alternates” were elected such as Debbi Kaner Goldich, Rabbi Ellen Wolintz-Fields, Deb Bruce, Temma Kingsley and Barbara Rosenau.  This year our members could choose to observe many of the sessions because they were live streamed which certainly opened up Congress to thousands of observers.

It is important to note that 232 Designated Delegates also represent the various International Zionist organizations such as Hadassah, B’nai Brith, WIZO, etc. For this particular Congress their input was essential and unique. The delegates from these organizations do not usually participate in decision-making votes. But without their assistance and creating a coalition of the more moderate and centrist Groups, the ultra orthodox could absolutely outvote any issue because of the numbers that they represented.

Just to make the point, of all the “Voting”, 192 delegates came from these organizations, 252 of us represented the Centrist progressive pluralistic Judaism, and 301 delegates were from the right wing/Haredi interest. If the organizations remain neutral all decisions would’ve been made by the Haredi/Right Wing.Main Focus: The most impactful part of the entire Congress was the final agreement which was able to stop a takeover by the ultra orthodox. As we were part of the MERCAZ Delegation, here is the statement put out by Sarrae Crane, their Executive Director that best describes the efforts made for this year’s Congress and why it is so important to continue to support them.
After a long and hard-fought struggle and many months leading up to this week, we just completed three days of the virtual 38th World Zionist Congress. We worked especially hard to preserve the voice of all Zionist viewpoints. MERCAZ, the Masorti/Conservative Movement, along with a coalition of Zionist parties in Israel and the Reform Movement, and the support of the Zionist organizations (Hadassah, B’nai Brith International, Maccabi World Union, WIZO and NAAMAT/USA), succeeded in blocking a divisive agreement and reached an agreement incorporating significant changes, which ensures checks and balances and inclusion of all the Jewish People in the leadership of our Zionist Institutions.
While the new agreement gives power to one side of the political spectrum, we remain confident that the changes preserve the national and pluralistic character of our Zionist Institutions. We will continue to fight for the character of Zionism and its values, and work to inculcate the principles of transparency, quality, and accountability.

For the first time in its history the Zionist Movement will appoint a President from the Center-Left Liberal Zionist block. The President will be nominated by the Yesh Atid party and designated for a female candidate, who will represent the Zionist Movement in Israel and abroad as an ambassador for all Zionist streams and viewpoints. Also for the first time, the Deputy WZO Chair and Deputy Head of the Jewish Agency (JAFI) will be representatives from the Reform and Conservative Movements. Yizhar Hess, previously head of Masorti Israel will hold the WZO position. Kachol Lavan will appoint the Keren HaYesod Chair. Movement parity is ensured in the KKL and WZO Executive Boards. New departments for Social Engagement (Tikkun Olam) – headed by Meretz, working with Israelis in the Diaspora – headed by the Reform Movement, and a unit for Humanistic Judaism – under the Labour Party will be established.

Together we prevented unilateral control by the Haredim of the KKL Education Committee. It will instead have two co-chairs, Kachol Lavan and Eretz HaKodesh, with each appointing a rotating Chair for the committee, and control of the KKL Finance Committee will move from Likud to Yesh Atid. Also prevented was the formation of a sectarian department for Orthodox Spiritual Services. All WZO departments will serve all sectors of Israeli society and the Jewish People. Allocations of departments and spheres of activity will be divided balanced, between the right and left.
We have plenty to be proud of. Great thanks to our negotiators, our delegates and our staff, as well as MERCAZ members who reached out to Zionist organizations throughout the negotiations. There is still much to do over the next four years to ensure that this situation does not happen again.
Here is the list of MERCAZ USA delegates/alternates. 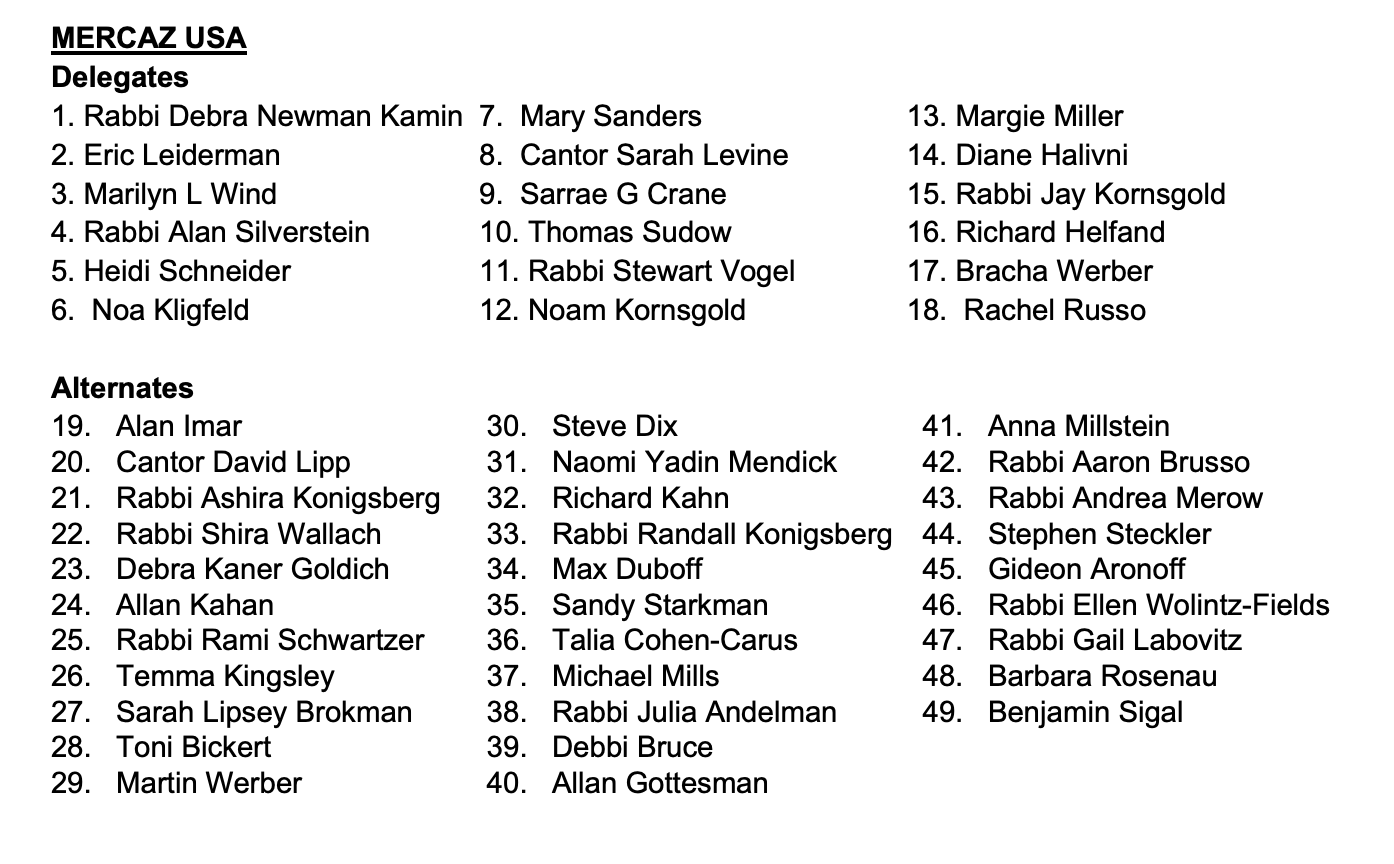