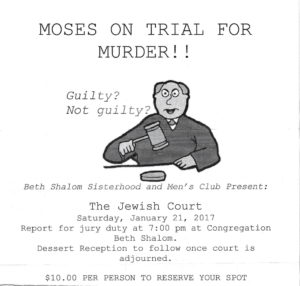 The mock trial was a joint program with Sisterhood and Men’s Club. We charged a small fee ($10) per person. As they checked in, each person was given a ballot. The program began with Havdalah. The Hazzan gave an introduction and explained the Torah portion about Moses slaying the Egyptian and then introduced each attorney as they entered. Then, he introduced the judge, who was wearing a robe and carrying a gavel. The prosecutor, defense attorney, and judge were all members of the Men’s Club and Sisterhood.

The judge explained the program to the jury (everyone attending). The prosecutor had 20 minutes for her argument, then the defense attorney had 20 minutes. After their arguments, the attorneys left the room. To make the trial was interesting and fun, the attorneys incorporated jokes from Facebook and Twitter. After the arguments were given, everyone filled out their ballots and they were counted as attendees enjoyed themselves to dessert, fruit, and coffee. Afterwards, the verdict was read and any questions were answered. To top off the evening, door prizes were given away.

Click here to view the script of  this Purim Spiel