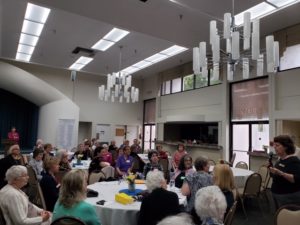 This program is an opportunity to bring together women not only from the synagogue but from neighboring churches and even mosques. It breaks down barriers and enables sharing at a meaningful level. It helps all participants to see how much we share; how much we have in common. And it’s a lot of fun!

Each person should bring one article of memorabilia that is important to her. It does not have to be a religious article. We had an amazing variety of items presented.

Each person will be allowed to speak for 1 -2 minutes and describe what she brought and what it means to her. An emcee makes sure that no single group dominates and everyone is given a chance to speak.

We started our event with a very appropriate welcome from our Sisterhood President, followed by a short D’var Torah (it’s copied below for reference). Then, the two Program Co-VP’s presented their items so that people could get a flavor for what to do.

We made sure to advertise the program well in advance. We made the program free with no need to RSVP (our total costs were under $40 – well under $1 per person).

For outreach, it is best to have one contact at each outside house of worship. She will publicize the program to her co-congregants and act as a conduit. We had one woman at each of the two churches which participated and one woman at our local mosque, although they did not participate.

As some of you ladies know, we begin most of our gatherings here at Temple Beth Sholom with a d’var Torah, or a word of Torah. D’var, though, can also mean “thing,” and each of us brings a thing today. And Torah means “teaching;” each of us will be teaching the rest of us the background and meaning of a thing.

Back to our d’var Torah. The Parshah Shavuah, or portion of the week, is Vayeira, derived from the word “appeared.” God appeared to Abraham in the plains of Mamre, while Abraham was recovering from his circumcision. God appeared as three men before Abraham.

And, for the first time in history, a man said to his wife, “Honey, I’ve invited company for dinner!” Abraham told Sarah to rush and knead and make cakes. Being a very good husband, Abraham participated in the meal preparations.

Many of the memories we will share today center around special meals, such as Passover Seders and Christmas or Thanksgiving Dinners. Indeed, this was a uniquely memorable meal for Abraham and Sarah. As we all know, the three visitors announced that Sarah would be giving birth within a year.

For some of us, the memorabilia we share centers around children. Certainly, there was no one who ever wanted a child more than did Sarah. She laughed with delight at the news of being a mother. Thus, the child was named laughter: Yitzhak.

Motherhood for Sarah was bittersweet, as she had to contended with Ishmael being a negative influence over Yitzhak, and, later, with the Akeidah, the binding of Yitzhak, the shock of which led to her death. Many of the memories we will share today will also be bittersweet, tinged with the pain of loss of those they recall. However, the parshah ends on a positive note, describing the future generations of Abraham.

All of us today will give thought to the future generations who will receive each d’var we speak about today. They will outlast us. Like the Torah which we return to each year with both recollections and new insights, these objects will cause our future generations to pause and reflect again.

For additional information or questions, contact Bethamy Weinberger at bethamy1@yahoo.com.