You are here: Home » News » Shabbat Message By Carol Simon

This coming Shabbat, not only do we read about Jacob, but we will most likely be reading an article, or two, about December 7, Pearl Harbor Day. As President Roosevelt stated, “A day that will live in infamy.”

For most of us, it is day that is a part of our family history. I know that it is for me and my family.

On December 8, 1941, many men and women, from all walks of life, Jewish included, enlisted. Japan’s bombing of Pearl Harbor brought the United States into the war, with many young Jews eager to serve a country that had been good to them and their families. My father, Phil Shayman was one of those young men. On that morning, he hitchhiked to Norman, Oklahoma from his college campus to enlist in the army. Besides young students from colleges and universities around the country, it is estimated that half of the eligible rabbis in the United States had asked to serve in the military chaplaincy.

In all, more than 550,000 Jewish men and women served in the U.S. armed forces during World War II, with an additional 17,000 Canadian Jewish soldiers. Those brave soldiers understood how fortunate they were to be living in North America at that time. Could that have been because they had parents that immigrated? Because they so well understood the importance of protecting democracy and fighting for our people that they felt that need to serve, to protect our freedom, and to ensure a safe democracy.

Yes, it was a “Day of Infamy,” but it was also a day that mobilized those that knew that they could not stay home and watch from the sidelines.

My father did not speak of his experiences in the army for those four-plus years, to his children, grandchildren, or any family member. Over the summer, my daughter found an interview he did in 2005 for a Veteran’s website. It was only then that I learned what his life was like, once he enlisted. From spending the summer in Florida, to the winter in Maine, signing up for Communications school, and then being placed in a platoon where he was a minesweeper, to being part of the group that liberated Mauthausen in Austria in 1945.

His story is just one of hundreds of thousands of other young men and women, on that day in 1941. This December 7, I urge each of us to think about that generation of men and women that stepped up to safeguard our democracy. And, if you are lucky enough to have a family member that participated, ask where they were that day and what they did because of that day that lives on in infamy. 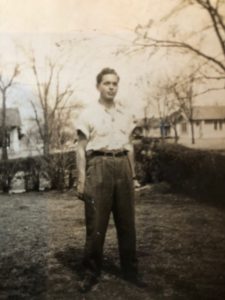