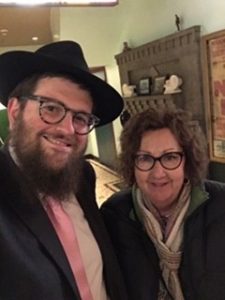 The Rabbi Goes West is a documentary profile about Chaim Bruk, a Chabad Lubavitch rabbi, who goes to Montana to set up a Chasidic center. This film just debuted in Somerville, MA, and was the closing film of the Boston Jewish Film Festival. My husband and I attended the screening.

Filmmaker Gerald Peary had wanted to make a documentary about Mezuzzim when he heard about Rabbi Bruk, who wanted to affix a kosher mezuzah to the door of every Jewish home in Montana. He thought that interviewing Rabbi Bruk would be an interesting part of the movie. After meeting Rabbi Chaim, his wife Chavie, and their family, the concept of the movie shifted to their story.

You might be thinking, why am I writing to you about a Chabad Rabbi? In March of 2012, my niece, Rebecca, delivered a baby girl, in Bozeman, MT two months prematurely. Her husband and their daughter Sylvia were med-flighted to Billings, MT – two and a half hours away – to a NICU that could take care of her.

Rebecca was held back until the following day, when she was discharged and could make the trip to Billings by car.

Feeling quite helpless in Massachusetts, I asked my niece what we could possibly do.  She had a simple request: Could I send brisket, kugel, and chicken soup? I completed the task by making my mother’s (Bubbie’s) brisket recipe and the rest of my niece’s request, along with challah and matzo balls. Sylvia continued to slowly improve. The family all had a log into the Caring Bridge site. This alleviated many phone calls and texts to Sylvia’s parents. I figured out how to send the food via two-day priority mail, frozen! And I shipped some really delicious comfort foods to the Ronald McDonald house in Billings, MT. Auntie Esta’s food arrived still frozen!

Rebecca received a phone call from Rabbi Bruk. This was an unsolicited call to comfort a stranger and pray for their baby. They had not met. When Sylvia was finally discharged and arrived back in Bozeman, my niece and her family received many visits from Rabbi Bruk. Hence, the beginning of a relationship with their family. In August of 2012, I flew to Bozeman for Sylvia’s baby naming and met Rabbi Bruk and his family. I became Tanta Esta, and it was a beautiful baby naming. While I was visiting, we also had Shabbat dinner with an amazing group of thirty-five people, and there was actually someone else there from Framingham, MA at the table!

The film was very moving. If you get a chance to view it, as it travels around the United States, I am sure you will think about our Torah Fund theme, Chesed, just as I did. Chesed means “acts of loving-kindness.” Wikipedia explains that, “Chesed is a Hebrew word. In its positive sense, the word is used of kindness or love between people, of piety of people towards God as well as of love or mercy of God towards humanity. It is frequently used in Psalms in the latter sense, where it is traditionally translated ‘lovingkindness’ in English translations.” This speaks to Rabbi Chaim Bruk and his acts of kindness towards my niece and her family. A true Mensch. The film also goes into Bruk’s decision to adopt children. In the time that they’ve been in Montana, the Bruks (Chaim and Chavie) have adopted five children.

Co-directors Gerald Peary and Amy Geller follow Rabbi Bruk around Montana as he sets forth on his quest to the approximately two thousand Jews living in Montana. Parts of this film are interviews with other rabbis in Montana and their reactions to Chasidism, in general, and Rabbi Bruk in particular.

The film is not just a profile of a Chasidic rabbi and his movement to “spread the word” in Montana. The film is also about different Jewish communities and the varying feelings and commonalities within those communities.

Wishing you and your families a Happy Thanksgiving!