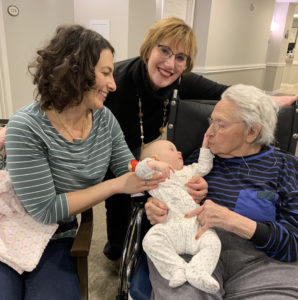 “There is something good in everything bad.” These wise words were always spoken by my very sage mother when something unfortunate happened. Who could question her wisdom after all she has lived through? After all, she survived Nazi Germany, Kristallnacht November 8-9, 1938, the voyage of the St. Louis in 1939, and internment at Westerbork in Holland and Terezin in (then) Czechoslovakia. While in Terezin she got married, only to lose her husband, his brothers and father, and her father three short months later when the men were sent to Auschwitz. My mother and her mother survived and eventually made it to the United States. At 96-1/2 years old, my wonderful mother is still physically healthy but has dementia and cannot hear.

You may be wondering, “What could possibly be good about that?” As sad as her situation seems, there is good in it. She is unaware that this Shabbat is the 81st anniversary of Kristallnacht and all that followed. She is also unaware of the ominous increase in antisemitism occurring around the world – including here in her beloved United States. How alarmed she would be! How would she react? Would she urge my brother and me and our families to take action to fight that frightening evil? Or would she want us to begin to look into fleeing to some other country that might be safer than the United States? Would she want us to go to Israel? Would she urge us to buy gold in case we end up somewhere where our dollars won’t save us?

As we ponder these concerns, we are grateful that she remains unaware of current events. I visit several times a week, never missing the opportunity to kiss her, hold her hand, and tell her she is the best mother and grandmother ever. When any of her five great-grandchildren visit, she enjoys them, whoever they are! And we try to explain to those great-grandchildren how special she has always been to their parents and why it is important for them to visit her. (Of course, the children generalize her condition to all “old people.” Recently, when I had some temporary difficulty with a crossword puzzle, my six year-old grandson said it was “because you’re old and you don’t know things!”)

As our week leads to Shabbat, please take a moment to recall Kristallnacht and all the horror that ensued for European Jewry. If those thoughts are unsettling, especially in light of the present political climate around the world, please remember my wise mother’s “There’s something good in everything bad.” You may have to create that good by becoming active in the fight against antisemitism, but, if you look hard enough, you will find it.