You are here: Home » News » Shabbat Message: “The Case of the Missing Mezuzah”

Shabbat Message: “The Case of the Missing Mezuzah” 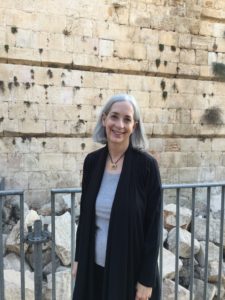 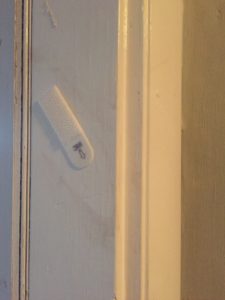 I’ve learned that, when it rains in Norfolk, Virginia, the street outside my building floods. The sidewalk and some of the grass disappear under the water. Once the rain subsides, the water recedes and the grass, sidewalk, and street reappear. I didn’t think I could imagine what Noah experienced when the rains finally stopped, the water finally receded, the land appeared, and the only living things were those that descended from the ark he had built.

And then, it happened to me. It wasn’t a rainy day, the sun shone. I left for minyan at 7 a.m. I returned at 8:30 a.m. The mezuzah was gone! It just wasn’t there on the doorpost. It was shining at me when I left the apartment and it wasn’t there when I returned.

Funny thing about our mezuzah, it appeared on the door when we moved in. It kept falling on the floor, so I kept using different types of adhesives to keep it on the doorpost. I finally found the right strip and the mezuzah was staying put – until the day it disappeared. I looked on the floor, but it had not fallen. It was nowhere to be seen. All that was left was the wall portion of the two-piece Command Strip. The mezuzah had been neatly removed from the doorpost.

I checked the back door of the apartment – that mezuzah was still affixed to the doorpost. I felt vulnerable. After all, there is a lock on the entrance into the building. I also was sad that this mezuzah, the one that showed up unexpectedly glued to our doorpost, now, unexpectedly, was gone.

I don’t know if someone needed a mezuzah or if someone thought it had a high silver content. I was really thinking, “What did they do with the parchment?” 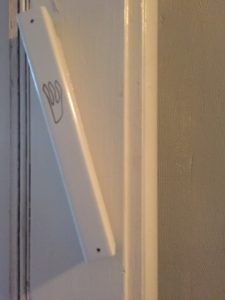 I called my husband and asked him to go to the Sisterhood Judaica Shop and buy the least expensive, plainest mezuzah case they had. He brought one home, but the parchment I had in the house didn’t fit inside the case. The rest of the cases in the shop were just too beautiful. I wanted something that would blend into the wall, something that would stay attached to our apartment. I found a plain, white, wood case that was sold by the inch. I was able to purchase one, into which I’d be able to fit my parchment. I placed the parchment inside, put the plastic screw on the bottom to hold the parchment in place, and decided to nail it into the doorpost.

Just one challenge – the plastic screw was inserted just where the very thin nail needed to go. I tried a different Command Strip, one that stuck to the wall and to the back of the mezuzah case – no more two-piece strips for me.

When the floodwaters receded, Noah went back to work and planted his vineyard. He returned to his “normal” life. The absence of our mezuzah meant that things were not right. Its presence on the doorpost, touching it as I leave and as I return to our home, means all is right with the world. We’re back to “normal.”