You are here: Home » News » Shabbat Message: “Women and Tzitzit: An Ongoing Tale of Freedom-Seeking”

Shabbat Message: “Women and Tzitzit: An Ongoing Tale of Freedom-Seeking” 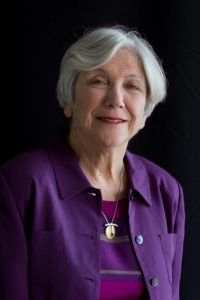 At the very end of this week’s Torah reading, Shelakh Lekha, God provides the Israelites a small token of reconciliation after the stormy story of the spies and the failed efforts to go to the Promised Land. In Numbers 15: 37-15:41, Moses is told to command the people to make fringes [tzitzit] on the corners of their garments with a special blue thread [petil tekhelet]. Upon seeing these fringes, the people will be reminded to “observe all My Commandments and to be holy to their God. I am the Lord who brought you out of the land of Egypt to be your God…” The Israelites were often told to remember the commandments and their commitment to God, but rarely is there such a unique memory device connected to the admonition. This paragraph, from the end of our parashah this week, is also the concluding paragraph of the Shema. So, the story of tzitzit and petil tekhelet begins; a twisted tale about who should wear these reminders and when. And a more complicated saga of how they are made and what happened to the magical blue tekhelet dye for the special thread.

For those of us Conservative Jewish women who have just started to wear a tallit in the past 50 years, the mystery and magic of tzitzit are still quite new. I do not pretend to be a scholar on either subject, but the discussion seems appropriate for a summer devar Torah, a fireside chat, or a walk along a beach. The quick story is that, presently, the tzitzit are attached to the edges of the tallit [“prayer shawl”] and are gathered together by the person wearing the tallit when they say the Shema. Orthodox Jews wear them all the time attached to a tallit katan, a four-cornered undergarment, the fringes either visible or not. In ancient times, people wore them on their actual regular daily clothing, and there are references to women in the Middle Ages having them on their aprons.

The tzitzit is just one of the many objects in Jewish life that allows us to connect and to remember our daily tasks and roles as Jews. Along with the mezuzah, Shabbat candles, the lulav and etrog, tzitzit are a physical reminder of who we are and the ethical and ritual responsibilities we have. Rabbi Shefa Gold points out that “Shelakh Lekha blesses us with both the mitzvah of remembering and a technology for fulfilling that mitzvah. We are instructed to put tzitzit on the corners of our garments and to place at each corner a thread of the purest blue.” She continues with the interpretation given by Nachmanides in the twelfth century: “looking upon that color, we will be reminded of the sea, and the sea will remind us of the Heavens, and of God.” The fringes become not only a mental reminder, but a physical enhancement of the daily act of being Jewish.

As a person focused on mindfulness as a way to enhance spirituality, the fringes are a perfect tool. The commandment is to see the fringes. This requirement “to see” is part of the discussion of whether the commandment is a time-bound commitment or not. Since women were exempt from time-bound mitzvot by the Rabbis of old, the question became whether women were required to wear tzitzit or not. After all, if one has to see the tzitzit, the command would apply only in the day and not in the dark. Over the millennia, halakhic authorities have differed over whether women were or were not required to wear tzitzit, and hence should make a beracha before donning, or even permitted to wear them. Sometime in the Middle Ages, tzitzit became specifically part of the tallit, the prayer shawl, and were taken out in reciting the Shema. There are traditional sources to support the wearing of tallit by women, and even some that require it. 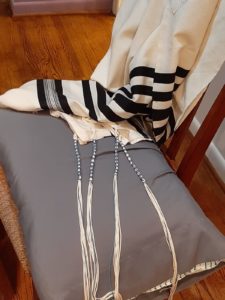 The Torah refers to a specific blue [tekhelet] thread to be woven into the fringes. How that is done is as varied as the source, but the most interesting tale is the disappearance of the blue dye, which colored the significant strands of the fringe. For 1300 years, the mysterious sea creature, the chilazon, from which the dye is produced, could not be found. The Jews had been dispersed away from the Mediterranean Sea, and had to make their fringes all white. In the 20th century, a scientist in the newly-born Israel did research to find the appropriate sea creature to make the blue dye. He was successful; the dye comes from the sea snail, Murex trunculus. In ancient times, this dye was used for special textiles – for robes of kings and for some of the decorations in the Mishkan. So, the color blue is not only to recall the wonders of the world and the majesty of heaven, but also a mark of distinction, and a reminder of what is required from a “kingdom of priests and a holy nation.”

Rashi taught that the Exodus from Egypt was conditional on acceptance of God’s commandments. This was a two-way agreement. The Israelites were obligated to follow the rules, so that their freedom from slavery came with a new set of commitments. This paradox of freedom is well-represented in the visual image of the tzitzit; the tightly tied knots above the loose strands of thread. As important as the actual color is, the patterns made by the blue and white strands of the tzitzit are open to analysis and elaboration. The commandment to wear tzitzit is part of a larger obligation to remember that we were freed from bondage in Egypt. The tzitzit without the color blue woven through and around it loses something, and only partially describes the experience of the Exodus.

When tekhelet was reintroduced in the mid-1900s, there were those who opposed its use, because it had been gone for so many centuries. The colored thread reappeared about the same time as the State of Israel became a reality and, for many, this was the message of true freedom, the fulfilment of G-d’s promise of old: of course, Jews of the third millennium would need the blue of tekhelet in their tzitzit as they gather them to pray.

For me, these few words at the end of this parashah opened a new understanding of the daily commitments of my Judaism. Remember that we in the United States only recently gained the opportunity to wear tallit and to pray in this complete fashion. The question of whether women can wear tzitzit has become political and symbolic. In Israel in 2012, more than 50 women were arrested for such usage at the Western Wall. This issue is alive in 2019. The traditional role of tzitzit in reminding us of our connection to the past is also an important step in moving into the future of our egalitarian Jewish life.