Tefillin 101, Week 4, will provide seven more interesting concepts about Women and Tefillin. For a groundbreaking article on Women and Tefillin – Anne Lapidus Lerner “‘Bind Them as a Sign…’ Not for Men Only.” Women’s League Outlook 64, no. 2 (Winter 1993): 13–14. 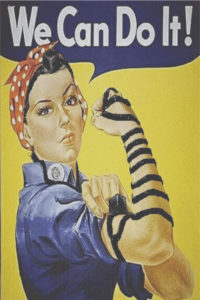 1 – Women and Tefillin – 1st century – 13th century
The earliest source found that discusses women wearing tefillin is the Tannaitic midrash on Exodus called the Mekhilta, which dates from the first century following the destruction of the Temple called the Tannaitic period. The Mekhlita states that Michal bat Kushi (Saul) wore tefillin, with no mention of the Rabbis protesting.

Tractate Tefillin written in the post-Mishnaic period, in approximately the second half of the second century, states that women are exempt from the commandment of tefillin, but does not give a reason for this exemption. The account of Michal bat Shaul wearing tefillin is related, without any mention of Rabbis, or even a mention of a possibility that the Rabbis would protest.

The earlier of the two Talmuds, the Talmud Yerushalmi, or the Palestinian Talmud, dating from the first half of the fifth century, in Berachot 2:3 and Eruvin 10:1, states that women are exempt from tefillin. A statement is made in both references in the Yerushalmi that Michal bat Kushi (Saul) did wear tefillin and R. HIzkiah in the name of R. Abbahu states that the Sages did object to Michal bat Kushi wearing tefillin.

While studying the text in the Babylonian Talmud in Eruvin 96a, the objection reported by R. Hizkiah is only known by studying the Tosafot, edited in the 12th-13th centuries, who quote the Pesikta Rabbati, a midrash dating from not before the ninth century, written in Palestinian Aramaic. Pesikta Rabbati states that Michal bat Kushi (Saul) wore tefillin, and Rabbi Hizkiah, in the name of R. Abahu, states that the Sages did interfere with her practice of wearing tefillin. The Tosafot on Eruvin 96a (12th-13th century) quote Rabbenu Tam, who lived in the twelfth century, who said that, if women wear tefillin, they should say the blessing. If Michal bat Saul wore tefillin, she must have recited the blessings.

(It is often said that Rashi’s daughters wore tefillin. I have never found the original source.)

2 – Women and Tefillin – 13th century – 14th century
The Rashba, who wrote in the 13th-14th centuries, also ruled that, if women are going to wear tefillin, they should recite the blessing because, if Michal bat Saul wore tefillin, then she must have recited the blessings.

Later, in the 14th century, Orchot Chayim, written by Rabbi Aharon ha-Kohen, quotes the Ram, Rabbi Meir of Rothenburg (13th century), who said that women are exempt from the commandment of tefillin, but states that it is a difficulty for him because, in Eruvin 96a, the Sages did not object to Michal bat Saul putting on tefillin. Could they be saying – if the Rabbis of the Talmud did not object to Michal wearing tefillin, why should women be exempt? The Orhot Hayyim, who wrote in the 14th century, quotes the Rashba and agrees that, if women wear tefillin, they must recite the blessings. These statements are very significant because it can be postulated that, if the question arose of whether women can recite a blessing when wearing tefillin, then, women must have been wearing tefillin at this time. The decision by these rabbis to allow women to recite the blessings when wearing tefillin shows significant support for women wearing tefillin.

3 – Women and Tefillin – 16th century
The Beit Yosef on the Tur, Orach Chayim, Hilchot Tefillin 38:1, written in the 16th century, quotes the Orchot Hayyim, which quotes Eruvin 96a, and also quotes the Ram, who quoted the Tosafot, who quoted Pesikta Rabbai, who said that the Sages did object to Michal bat Saul putting on tefillin, even though Eruvin 96a says that the Sages did not object. The reason given for their objection is that a clean body is required. (And this source shows, you always quote those who you learn from.)

The concept that one needs a clean body in order to don tefillin, is learned in Shabbat 49a, where it is taught that Rabbi Yannai said Tefillin need a guf naki [in order to be worn], like Elisha the Winged One [had]. What is it? Abaye says not passing wind with them on (flatulence), Rava says not sleeping with them on.

The Yam Shel Shlomo, written in the 16th century by Rabbi Shlomo Luria (1510 – 1574), states that the Sages did not object, because Michal bat Saul was a completely righteous woman – the wife of a king, and thus royalty and also childless, so she was able to keep herself clean.

4 – Women and Tefillin – 17th – 18th century
It was later recorded that the wife of the Kabbalist Rabbi Hayyim ibn Attar (the author of the book Or Ha-Hayyim, the Light of Life, written in Venice in 1742, a commentary on the Pentateuch), who lived in the later 17th-early 18th century wore tefillin. It is not recorded that Rabbi Hayyim ibn-Attar objected to his own wife wearing tefillin.

5 – Women and Tefillin – 19th century
The Maid of Ludimor (1805 – 1892), whose real name was Hannah Rachel, the only child of Monesh Werbermacher of Ludimor in the Ukraine, was reported to have worn tefillin. She prayed with strong emotion and studied Midrash, aggadah, and philosophy. During an illness, she had a vision, in which she felt she received a new soul. After her vision, she began to observe religious rituals usually only observed by men, such as wearing a tallit and donning tefillin. She said Kaddish for her father and many people came to listen to her teach. She was considered a tsaddik (a righteous woman).

6 – Women and Tefillin – 20th century
The Aruch HaShulchan, written in the 20th century, states that, although Michal bat Saul wore tefillin, there was no protest. It adds that this is not to be considered a precedent, because the Sages knew that Michal bat Saul was a completely righteous woman, and she knew how to keep herself clean.

7 – Summary of Sources
The following is a synopsis of the question, “Should women wear tefillin?” answered by Rabbi David Golinkin, president of the Schechter Institutes, Inc, from June 26, 2013, that can be found at https://jewishjournal.com/opinion/118132/should-women-wear-tefillin/. To learn more, one can also read The Status of Women in Jewish Law: Responsa from the Va’ad Halakhah (Law Committee) of the Rabbinical Assembly of the Masorti movement in Israel.

The Babylonian Talmud mentions (Eruvin 96a) that Michal, the daughter of King Saul, used to wear tefillin “and the Sages did not protest.” Rabbi Abbahu, however, reported in the Palestinian Talmud (Berakhot, Chapter 2, fol. 4c) that Michal wore tefillin and “the Sages did protest.” Thus, on the basis of the talmudic sources alone, our ruling would be that women are permitted to wear tefillin, since, when the two Talmuds contradict each other, we follow the Babylonian Talmud.