1 – Tefillin is worn or Tefillin are worn? Singular or Plural?
Although “tefillin” is technically the plural form (the singular being “tefillah“), it is loosely used as a singular as well. The arm-tefillah, or tefillah shel yad – is placed on the upper arm, and the strap wrapped around the arm/hand, hand and fingers; while the head-tefillah or tefillah shel rosh, is placed above the forehead.

2 – Why Tefillin?
The word tefillin (called totafot in the Torah) means “emblem, sign, insignia,” the visible symbol of an abstract idea. Tefillin are our reminder of the commandment of the Shema: “Love the Lord your God with all your heart, with all your soul and with all your might” (Deut. 6:5). Tefillin thus symbolize the love for God in emotion (heart), thought (head), and deed (hand).

According to the Mishneh Torah, Tefillin, Mezuzah and the Torah Scroll 4:2, the tefillah shel yad is bound on the left arm over the biceps muscle, which is the flesh that stands out on the upper arm that is between the shoulder blade and forearm, so that, when the upper arm is held close to the ribs, the tefillah will be opposite the heart, and thus the precept will be fulfilled, ” And these words…shall be upon your heart,” as stated in Deuteronomy 6:6.

4 – Some people wear the tefillah shel yad on their left hand, and some on their right. Why?
According to the Shulchan Arukh, Orach Chayim 27:6, a lefty who does all one’s work with one’s left hand puts one’s Tefillin on one’s “left hand,” which is the right hand of all people (when one faces someone else). And, if one uses both hands, one places them on the left of all people…If one writes with one’s right hand and does all other work with one’s right hand, there are those who say to put the Tefillin on one’s weaker hand, because we “need the weaker hand.”…And there are those who say that the hand with which one writes is considered the right hand for this, and one puts one’s Tefillin on the other hand.

5 – What are some differences between the tefillah shel yad and the tefillah shel Rosh?
The tefillah or tefillin shel yad, the hand tefillin, is a single cube (bayit), in which the four parshiyot, Torah portions, are written on one strip of parchment. The surface of the batim, the boxes, other than the bottom, are painted black. The paint must be made from kosher ingredients only. The bayit of the tefillah shel yad is solid, with nothing written on it. A knot, kesher, is tied on the strap of the tefillah shel yad, so that a loop is left outside of it. There are different customs regarding the location and size of the loop. The hand strap ends in two knots. The topmost knot (kesher) is in the form of the Hebrew letter yud, which is referred to as the yud shel hakesher (the yud knot).

The tefillah or tefillin shel rosh, the head tefillin, is composed of four separate sections of leather, each of which contain one of the four parshiyot, Torah portions, written on parchment. These four separate sections of leather are then pressed together to form a cube. Two forms of the letter shin are written on the bayit of the tefillah shel rosh. A three-headed shin protrudes on the right side of the bayit cube of the tefillah shel rosh. A four-headed shin protrudes on the left side of the bayit cube of the shel rosh. There are different customs of how the shape of the shin appears, as there are different customs of the calligraphy used for parchments. A knot (kesher) is tied on the strap of the head tefillah, so that it can fit on a person’s head. There are different customs concerning the shape of the knot, which forms the Hebrew letter Dalet.

6 – What are retzuot?
The retzuot are the leather straps, which tradition states, should be at least the length of barley-corn in width. The Babylonian Talmud in Shabbat 108a quotes Exodus 13:9, which states, “so that the Torah of God will be in our mouths.” Hence, the leather of the straps for the Tefillin must be from an edible animal, i.e. a kosher animal, and must be processed with the intention of being used for tefillin. The length of the straps for the head tefillah should be sufficient to surround the head, tie the knot, and extend on either side of the head until they reach the navel or a little above it. According to the Tur, Orach Chayim, 27, the strap of the right side should hang slightly lower than that of the left. The length of the strap of the hand tefillah should be sufficient enough to surround the muscle and forearm, tie its knot, and extend until it can be wound three times around the middle finger and tied. The lengths are minimum measures. If the straps are longer than these lengths, the tefillin are still usable.

7 – How have we learned how Tefillin should be made?
It is traditionally believed, as learned in Maimonides’ Mishneh Torah, that ten details of Tefillin are laws given to Moses at Sinai, and so, these ten details of Tefillin cannot be changed in any way. Two of these are with regards to their writing, and eight of them are regarding the covering and the tying of the straps. These are the two regarding their writing: They must be written in ink, and they must be written on parchment. The following text from Mishneh Torah, Tefillin, Mezuzah and the Torah Scroll 3:1 teaches the eight halachot (laws) with regards to the making of Tefillin that are halakhah (law) from Moses at Sinai:

Questions before the next installment of Tefillin 101?
Contact Rabbi Ellen S. Wolintz-Fields at
ewolintz-fields@wlcj.org. 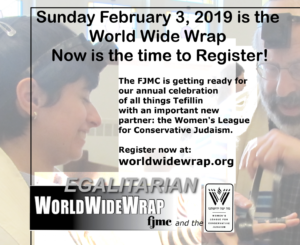