You are here: Home » News » WLCJ takes on the United Nations!

WLCJ takes on the United Nations! 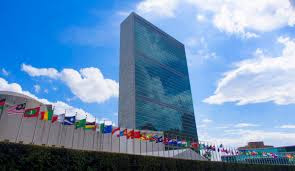 On October 23, 2018, 50 women from the Women’s League BQLI, MetroNorth, Garden State, and Mid-Atlantic Regions, including Margie Miller, WLCJ International President and Rabbi Ellen Wolintz-Fields, WLCJ Executive Director, arrived at the United Nations Headquarters (UN) to take a tour, meet our WLCJ Non-Governmental Observers (NGOs), and hear from a member of the Israel Permanent Mission to the UN. As always, the women enjoyed being together, talking, learning and exchanging ideas.
During our tour, we walked the halls of the UN and stepped inside the UN General Assembly Hall and the Economic and Social Council (ECOSCO). Unfortunately, the Security Council Chamber was in session, so we unable to go in and observe. We joined hundreds of people from all over the world and heard multiple languages, as tours are given in the six official languages of the UN.
We saw sculptures, paintings, mosaics, and tapestries donated by member countries over the years. One large painted mural, nearly 20 yards long and nearly four yards high, “Mankind’s Struggle for Lasting Peace” by Spaniard José Vela Zanetti, begins with the destruction of a family and ends as mankind reconstructs a war-torn world. 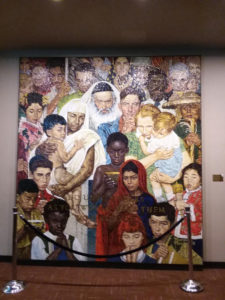 A large mosaic tile mural, “The Golden Rule,” (pictured above) is based on a painting by Norman Rockwell. Nancy Reagan presented this gift of the United States in honor of the UN’s 40th anniversary (1985). 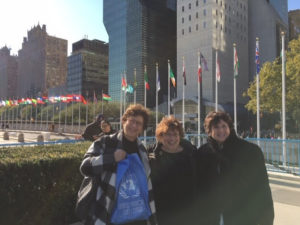 Following our tour, we gathered in a meeting room and were introduced to Sarah Weiss Ma’udi, Legal Adviser for the Permanent Mission of Israel to the United Nations, and former director of the General International Law Department at the Ministry of Foreign Affairs. Ms. Ma’udi, an expert on maritime and humanitarian law, described her past efforts to defend Israel’s actions in Gaza to the world, and demonstrated how she fielded public relations queries from the media.
She also gave us an excellent overview of the challenges Israel faces on the world stage: the Jewish people’s right to its land versus overlapping claims to this land since the 1993 Oslo Accords, media portrayal of the Israel/Palestinian conflict, the non-state actors and existential threats that influence this “narrative,” and numerous resolutions brought against Israel by the voting nations of the UN. Finally, Ms. Ma’udi emphasized how she hoped Israel’s humanitarian aid to developing countries, though under-reported, might help change stereotypes around the world about the Jewish State. Before leaving, we visited the “Gift Centre.” Would you believe the UN has a souvenir shop where you can get key chains, mugs and banners, along with pottery and jewelry from around the world?
Quite a day for our WLCJ delegation. Food for thought in a world where shots were fired during a bris at Shabbat morning services just days later. Where we fight anti-Semitism more and more each week. The warmth, intelligence, and links we have with our WLCJ sisters mean even more now than they have in times past. Keep up the connection, everyone – the support, common ground, and understanding holds us up as our Jewish community grieves.
Special thanks to our WLCJ UN NGOs, Lucy Becker, Sandy Koppell, and Florence Wolpoff, who helped us organize our multi-Region UN visit.