You are here: Home » New Outlook » Features » From Saskatoon to Lagos and Onward

From Saskatoon to Lagos and Onward 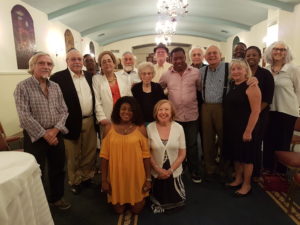 In October 2016, on a visit to Saskatoon, Saskatchewan, Canada, I was informed that the Shir Chadash Synagogue had a problem: Sixty-six chumashim were being replaced, and a solution was needed to prevent them from being buried, according to Jewish tradition. Board member Mary Melnychuk explained that, without finding a new home for the books, they would be a total loss. The Sisterhood has only eighteen members, but is totally committed to the congregation, and to the community at large. But something needed to be done, and quickly.

When I returned home to Minneapolis, I tried contacting my own rabbi, my friends, friends who had friends, and, finally, I was directed to Harriet Bogart at Kulanu.org (All of Us). She connected me with Remy C. Ilona, an author and attorney from Nigeria and a member of the Igbo Tribe, who was studying in Florida. What was amazing is that, when I spoke to him, he was nearly in shock, as he had just been begging a local Rabbi to give him three chumashim, which he planned to send back to his country. I e-mailed Mary, who immediately sent Remy five copies. The next step was to find a way (and raise the funds to cover the costs) to ship the remaining sixty-one books overseas. A notice was put in the next several issues of our region bulletin and, over a period of a few months, $800 was raised. This amount, when added to the amount donated by Shir Chadash, was just enough to have the chumashim on their way to Lagos, Nigeria. On May 31, 2017, they were collected from the customs office by Dr. Duru, a trusted friend of Remy, and a co-leader of the Igbo, like Remy, and sent to the communities in need. Congregation Siyahh Israel in Abuja and Congregation Ulo Israel in Owerri, each with between 25-35 adults, were excited to have this remarkable gift.

Now, just over a year later, I have stayed in contact with Remy. Time and again, he has expressed his gratefulness to the region and to the spirit of those women who didn’t let a little thing like “It’s never been done before!” stand in the way of accomplishing a true mitzvah. Remy has written numerous articles and books about the history of the Igbo and how, for a long time, this group has been referred to as the Jews of Africa. In fact, the Igbo have been native to 16,000 square miles in the deep south of Nigeria for an estimated one thousand years. He states that the Igbo way of life is called Omenana; translated to English, one gets “things, laws, customs, traditions that you have to do or observe in or on the land.” This not completely dissimilar from Jewish tradition!

Remy believes that this code gives a clear message to all who follow it, because the Torah contains similar laws and customs that the Israelites do and observe. Sam Kastenbaum, a writer for The Forward, wrote this about Remy in January 2016: “He is a Nigerian lawyer and member of the Igbo Tribe who went on a quest to confirm the connection to Israel. He said, ‘The Igbos discovered that the Igbo religion is Judaism; they became Jewish and they dropped Christianity. When we found rabbinical Judaism, we saw that it was the same as the Igbo tradition.’”[i] If you are inspired by this story and wish to learn more about the universality and uniqueness of this tradition, a much more detailed history of the Igbo can be found at https://www.israelrising.com/tag/igbo/.

Ardis Wexler is the Immediate Past President of the Women’s League IntraContinental Region (ICR), which covers almost 2.4 million square miles, has nearly 3200 Women’s League members in 23 congregations, and includes the provinces of Manitoba and Saskatchewan in Canada, and the states of Minnesota, Iowa, Kansas, Missouri, Texas, and Oklahoma.

Kulanu supports Isolated, Emerging, and Returning Jewish Communities around the Globe and has supported Remy Ilona’s research since 2003. Learn more about Remy and his community at kulanu.org/nigeria and Kulanu’s related outreach work at https://kulanu.org/communities/nigeria/. 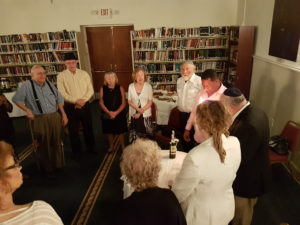