You are here: Home » News » Former Women’s League president brings the art of weaving to her synagogue 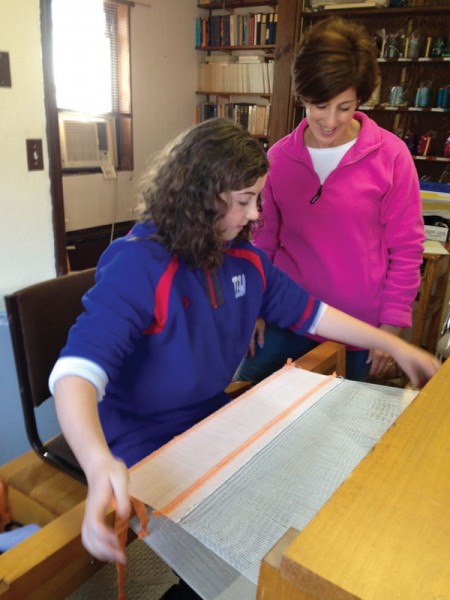 While it is common for many young people to receive a tallit at their bar or bat mitzva ceremonies, few can say they personally designed and wove the religious garment.

At Neve Shalom in Metuchen now many can. The Conservative synagogue now has a dedicated “loom room,” where, under the guidance of trained volunteers, congregants, including religious school students, have woven such items as tallitot, tallit and tefillinbags, and matza and hallah covers.

“It is such a joy to watch these people weave,” said loom project chair Cory Schneider. “You can buy this stuff, but to be able to create something Jewish with your own hands is very exciting. We’ve had men, women, and kids weave. We’ve had grandparents weave with grandchildren. The nursery school class wove a hallah cover for their Friday Shabbat celebration. Each child chose a color and wove it into the beautiful hallah cover they use with pride.”

The project was established last fall in partnership with the Conservative synagogue’s sisterhood, Schneider said. The novice weavers have created items they foresee as family heirlooms to be given as wedding or engagement gifts; one woman wove a tallit to mark her retirement, another for her conversion to Judaism. Schneider said the program has proven so successful that the congregation is now opening it to nonmembers.

She wanted to bring looming to Neve Shalom based on her own experience weaving a tallit for her oldest son, Steven — now a Neve Shalom vice president — 35 years ago when the family was living in Harrisburg, Pa.

“It was a nonegalitarian synagogue, and I wanted to do something Jewishly for my son’s bar mitzva,” Schneider said. It proved so rewarding that she did it again for her two younger sons and for her father at another synagogue in Harrisburg that had a loom. More recently, Schneider wove a tallit for her granddaughter’s bat mitzva.

Several years ago, when Schneider and her husband, Stan, moved to central New Jersey and joined Neve Shalom, she noticed an unused loom in a neighbor’s garage and convinced the owner to donate it to the synagogue. The congregation agreed to pay for supplies and the organization and upgrade of the room, and the sisterhood came on board with volunteers. Assistance in launching the program was provided by the Jewish Community Center of Wyoming Valley in Wilkes-Barre, Pa., which has a large looming program; Schneider herself devoted “hundreds of hours.”

Schneider said the program’s organizers believe it is the only other Jewish institution nationally besides the Wilkes-Barre JCC and the Harrisburg synagogue to have a loom program. She said one of the favored activities has been creating intergenerational b’nei mitzva tallitot, which allow wearers to design the striping pattern using crayons or colored pencils on a template. The tzitzit, or knotted fringes, are tied by the wearer as well as a special person in their lives, often grandparents.

Michelle Stein of Metuchen helped her daughter Ilana weave a tallit for her Sept. 24 bat mitzva, an experience she described as “amazing.”

“Ilana wanted one, but didn’t know what she wanted so we went one day while the loom room was being set up just to see what it looked like,” said Stein. “She was just amazed because she got to pick colors that weren’t the normal colors…. Hers is pink with darker pink and silver striping.”

Stein said she worked on the project during the day and brought her daughter on Sundays or in the evenings. “She did almost half herself,” she said.

Being inexperienced weavers, there were a couple of minor imperfections, Stein said, but that only made the garment even more personal and special. And even though she has never owned a tallit, Stein is now eager to weave one for herself.

Sisterhood president Jennifer Bullock said that since the sisterhood took on the project she has been involved in every facet, including mentoring, teaching, and weaving tallit and hallah covers.

“Seeing other people get into the groove of weaving and seeing them weave something for themselves or a family member,” she said, “something gets into your neshama, your soul.”

Volunteers will work with loomers until they feel comfortable, after which they will be given two weeks to complete their projects on weekdays, evenings, and Sundays. Sample prices, which include materials, instruction, and support, are $225 for a basic tallit, $50 for hallah and matza covers; and $30 for a tefillin bag; there are surcharges for nonmembers.