Three hundred women, aged 13 to 90, singing Debbie Friedman’s Lechi Lach. With this song reverberating in our ears, we embarked on a journey of new discoveries. In the tradition of past study days, we sang in several languages, bringing us together despite differences in language, age and background  and to emphasize our shared commitment to educating ourselves to contribute to the betterment of our families, our kehilot, and Israeli society as a whole.

For 17 years, the Masorti Women’s Study Day has been a stunning example of joint cooperation among Women’s League for Masorti Judaism, the Schechter Institute, and the Masorti Movement. Originally created by Women’s League as an educational project in Israel, this year’s study day drew its usual crowd of nearly 300 women representing most of the Masorti kehillot (congregations) and kept to its four-language format with classes based on the theme taught in Hebrew, Spanish, Russian and English.

The  day opened with an interactive tefillah (shacharit service) that included singing Ose Shalom in our common “sign” language, followed by a celebration of the 90th birthday of the revered Professor Alice Shalvi, mentor of the study day since its inception. Rabbi Minna Bromberg soulfully sang Handel’s Where E’re You Walk, while nursing her new born baby. To the joy of everyone, Alice joined in, full voiced, and continued on her own with the second verse. Cantor Shula Reznick led everyone in  Etz Chaim He. Both songs reference a tree, symbolizing Alice around whom we all gather. The youngest participant, 13-year-old Penina Falk,  presented the honoree with an album, its cover depicting Alice and women in her classes, which will hold birthday greetings.

Other highlights of the day:

Art Exhibit: Dr. Shula Laderman, Senior Lecturer in  Jewish Studies and Art, together with artist Ruth Kestenbaum Ben-Dov explained the meaning of the paintings in an  exhibition at Schechter. The artist references the similarities between cultures, such as a prayer carpet and  Torah Ark parochet.

Social Change: Recent rulings in Israel on issues impacting women were the impetus for Dr. Susan Weiss’ lecture Does the Rabbinate Own our Bodies? Rabbi David Golinkin discussed women’s roles in education with Prof. Shalvi, who shared her personal struggles as an Orthodox woman running a school for girls. Rabbi Diana Villa, lecturer and researcher at Schechter’s Center for Jewish Women and Law,  teamed up with Shira Friedman, the Masorti representative at the Knesset, to provide background about agunot, women denied a get (religious divorce) by their husbands.

Music: A workshop taught songs expressing the love and dreams of returning to Jerusalem by  musicians in their native Hebrew, Spanish, Russian or English.

Text Studies and Spirituality: Our traditional beginner Talmud class by Rabbi Liron Levy (Neve Hana  Youth Village) assured participants that they could study Talmud while Rabbi Shira Israel, with her solid grounding in Torah, Talmud and the Zohar, raised her students to heights of spirituality showing that it is within the reach of all.

Mother and Daughter: Naomi Graetz, author and  lecturer emeritus at Ben Gurion University, and her daughter, Rabbi Ariella Graetz Bar-Tuv, were both presenters. Rabbi Ariella discussed the Crown of Gold given by Rabbi Akiva to his wife comparing it to how we look at material wealth in our lives. Her mother explored female images of Jerusalem.

Women in the Cairo Geniza: Prof. Rene Levine Melammed’s discussion about crypto-Jews (Jews who had to keep their faith hidden) opened a previously closed world, bringing to life many  unknown women.

Chagall and Women: Rabbi Judith Edelman-Green combined spirituality and her knowledge of art to offer a different look at Marc Chagall. 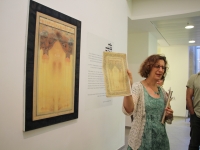 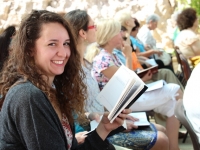 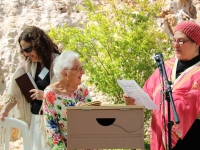 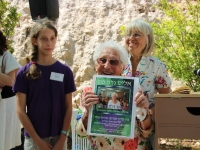 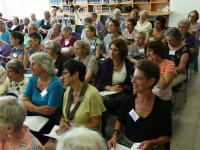 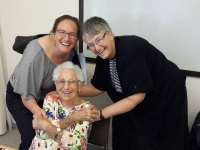