The Jewish Home Beautiful – You Want Me to Do What? 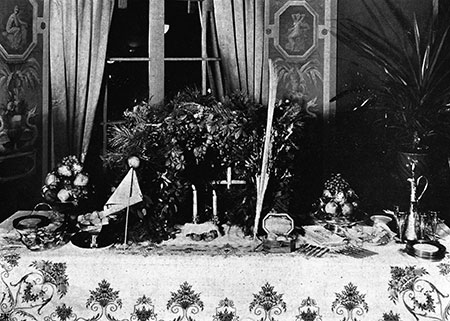 If you were a guest at a Jewish bridal shower in 1960, there is a good chance you would have dined on finger sandwiches, Jello molds and fruit punch. The gifts for the bride might have included a pressure cooker, peignoir set, egg beater, and without question, a copy of The Jewish Home Beautiful. While the pressure cooker and egg beater encouraged the new bride to reach for some competency in the kitchen, The Jewish Home Beautiful inspired something much more sublime.

Written by Betty Greenberg and Althea Silverman, with 13 printings between 1941 and 1975, The Jewish Home Beautiful was the most successful and enduring of all Women’s League publications, found in tens of thousands of Jewish home libraries. While a third of the book contains traditional holiday recipes such as kreplach, potato latkes, hamentashen, and honey cake, The Jewish Home Beautiful is more than a mere cookbook. It also provides exquisitely detailed instructions for setting a table to create a “home holiday pageant.” As Greenberg and Silverman say in their introduction, their goal was to inspire the Jewish homemaker: “To live as a Jewess, a woman must have something of the artist in her.”

This was an entirely new approach to home observances. Food preparation was only half the battle; equally important were presentation and ambiance. In a radical departure from other early 20th century American Jewish cook-books, especially the immensely popular Settlement Cookbook, The Jewish Home Beautiful beautified holiday celebrations.

Author Althea Silverman had first created these choreographed holiday tables/pageants for her sisterhood in Hartford, Connecticut, in 1932. Women’s League hastened to support the project the following year with detailed descriptions of the table exhibits in the original Outlook magazine. Within the next few years, the project gained greater momentum with a staged pageant at the National Convention of the Women’s League in Atlantic City in May 1940, and then in September 1940, in a Joint Sisterhood Assembly in the Temple of Religion at the New York World’s Fair, which led to the 1941 publication of the hard covered book by Women’s League.

The widely disseminated step-by-step manual meant that the ability to create such enhanced holiday celebrations was no longer confined to those living on the east coast. Women in Galveston, Texas, or Portland, Oregon, or Vancouver, British Columbia, now had the inspiration and directions to adorn their holiday tables with porcelain images of Mordechai and Esther, crepe paper dreidel centerpieces, and miniature Bibles and Torah scrolls. Hanukkah fare did not merely involve the prosaic potato latke, but also featured menorahs of cream cheese and maraschino cherries. In addition to the recipes, table setting instructions and ritual prescriptions, The Jewish Home Beautiful provided elaborate scripts of historical narrative, poetry and musical suggestions for the successful home pageant.

It was a majestic little book. But what, if any, historical reality did it reflect? What woman was willing or able to stage a home production with a set table like this:

“For Purim: the table for eight should have service plates, silver, glassware. The color scheme is gold and red or blue with a gold cloth, red rose centerpiece, red or blue candles and red or blue glassware. A doll of Queen Esther is seated on a tiny throne in a flower centerpiece and Mordechai is perched atop a porcelain horse – another figure of Haman is situated opposite them. A partially unrolled megillah adorns the table; also groggers, masks and a platter with a papier mache goose.”

Oh, and don’t forget the tiny chest of coins for the poor. Enormously engaging, but I repeat, for whom, exactly, was the book written? 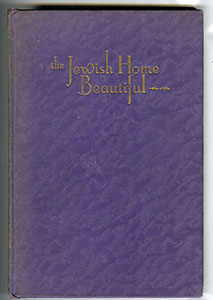 In 1941, Jewish households had barely begun to emerge from the hardships of the Depression. Women in Conservative synagogues were principally East European immigrants and their first generation offspring. They were, for the first time, achieving a new found middle class status, their lives no longer the echo of mere subsistence and privation. Moreover, the values reflected in The Jewish Home Beautiful were not East European survival pragmatism, but rather those of the central European Jewish hausfrau whose domestic gentility and accomplishments were plainly visible in her home, one that was both religiously centered and aesthetically pleasing.

The goal of The Jewish Home Beautiful – for most of Women’s League’s educational initiatives – was to fully Americanize, and now, also, to craft an aesthetic style, for its members. Food and holiday preparations had always been a principle role for Jewish women, but this re-imaging of traditional observance was intended as a stepping stone to middle class status. The Jewish Home Beautiful was not only an inspirational manual for the Jewish housewife, it was also aspirational. Perhaps even more than demonstrating her artistic expertise, a Jewish woman able to construct such a sumptuous holiday table reflected her family’s financial success. It was the ultimate achievement for women whose mothers and grand-mothers set their holiday tables with oil cloth coverings and mismatched crockery.

As a how-to manual, The Jewish Home Beautiful is endearing and more than a tad eccentric. But as a glimpse into the social lives of Jewish women in mid-20th century North America, it speaks volumes. So, as either a source for schnecken or carrot cake recipes, or as a delightful historical morsel… be’teavon!