You are here: Home » New Outlook » Features » Rabbi Ima: The Kids Are Alright

Rabbi Ima: The Kids Are Alright

When your mother is a rabbi… 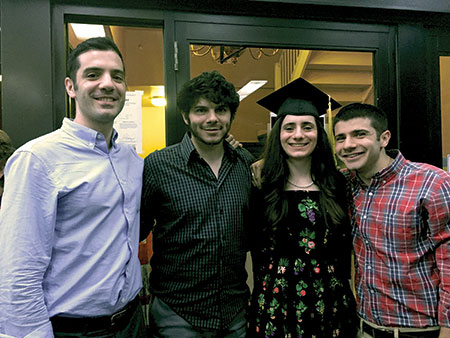 Mom’s a Conservative rabbi. So what’s that like? “Sometimes, I forget she’s a rabbi, because she’s just my mom and not in the pulpit,” Yael Marans, 18, of Teaneck, NJ, said of her mother, Rabbi Amy Roth. Aware of the irony, she added, “But then, one of my brothers will remind me, ‘hey, you know, mom’s a rabbi, too’.”

At the same time, Yael long assumed “that in the Conservative movement, there is gender equality. I wasn’t made aware of the bigger picture – that nothing is equal from a gender perspective – until I heard my mom speak on a panel about the experience of being a woman rabbi and the types of discrimination women rabbis still face.”

Yael’s perspective reflected several threads to emerge from conversations New Outlook had this summer with Millennials who have come of age since the Conservative movement ordained its first woman, Rabbi Amy Eilberg, in 1985.

In just over three decades, the number of women who are members of the Rabbinical Assembly has climbed steadily. Today, more than 19 percent of RA members are female, and seminary classes have nearly equalized in gender.

Examining the intersection of feminism, gender and Conservative Judaism in a year that has seen the history-making major-party nomination of Hillary Clinton for president, New Outlook asked, what do the children have to say about how their mothers’ jobs and experiences shaped their own choices and attitudes?

Because they all grew up in committed, observant homes – two of the fathers are also Conservative rabbis – they insisted Jewish influences were not the sole province of their mothers. But being raised observant, educated in Jewish schools and camps, and embedded in Jewish community is no guarantee of future commitment. These young people represent a range of Jewish practice today, from ‘cultural, just Jewish’ to strict daily ritual observance. 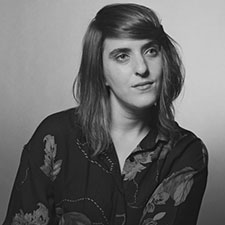 Perhaps more critical than their influence on their children’s Jewish identity and lifestyle, we heard repeatedly that Conservative rabbi-moms role modeled a version of feminism that pushes boundaries for women in Judaism, in religious life and in secular society, promoting social and economic justice, equality, diversity, tolerance and inclusion.

Rabbi Eilberg’s daughter, Penina Eilberg-Schwartz, 29, is currently living in “Israel/Palestine,” working on a book of literary nonfiction, based on the narrative of her friend, Sulaiman Khatib. A Palestinian peace activist, Khatib Penina Eilberg-Schwartz co-founded Combatants for Peace, a joint Israeli-Palestinian initiative. Penina has worked on issues of justice surrounding the Israeli-Palestinian conflict through organizations like Abraham’s Vision, the Rebuilding Alliance and the New Israel Fund.

“My mother’s struggle to find a place for women in the Conservative rabbinate affected me deeply,” Penina wrote in an email message. “I’ve tried to find ways to challenge spaces that are not adequately self-critical, not open enough to the voices that challenge them. There is no question that my mom’s story and the principles she taught me affected this ongoing project.”

While Rabbi Eilberg did a brief stint in the pulpit when Penina was a toddler, she found the time commitment incompatible with motherhood. In choosing an alternative to the traditional path of a rabbi, through years in the chaplaincy, spiritual counseling and now interfaith dialogue and grassroots peace activism, she is far from alone. Only about 32 percent of the Conservative women rabbis now working have pulpit jobs. Another quarter are employed as chaplains or by communal organizations; an additional near third are in Jewish education. [Rabbinical Assembly statistics]

Rabbi Roth, Yael’s mother, and Rabbi Shelley Kniaz, the mother of Matan Kniaz-Diamond, 17, also of Teaneck, are both directors of congregational education at large synagogues in the New York metropolitan area. “My mom is the head honcho, with a whole system to run, and I am very proud of her,” boasted Matan. He applauded how she asserts her authority, calling her a “Renaissance woman” at work and at home. “There is no ‘man of the house.’ My parents are equal partners. Mom cooks, dad shops. They both do Kiddush; I do Motzei.” 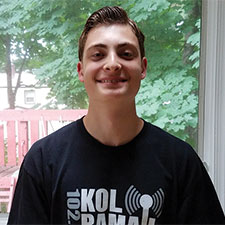 He called her an inspiration in his own interactions with classmates in his large, diverse public high school. “I help make ‘the other,’ the Conservative Jew with a mom who’s a rabbi. Everybody brings their culture to school, which I love. I literally bring Jewish culture to the table, with my kosher food from home for lunch.”

Yael recalled that ‘ah-ha moment’ when she heard her mother speak about how women rabbis are treated with less respect than their male colleagues. “It can be small things, like calling them by their first names instead of their title, of it not occurring to people that they are more than teachers, they are ordained rabbis.”

Yael, whose father, Rabbi Noam Marans, is director of interreligious and intergroup relations at the American Jewish Committee, noted: “I became attuned to that difference because I see how people treat my parents differently at times. They are an obvious case study for me and affected how I think about these things.”

Yael’s practice of putting on t’fillin every morning is just one aspect of her committed Jewish observance she acknowledged was a direct result of her mother’s role modeling. “I don’t know that I’d feel as empowered to get as involved if only my dad was a rabbi,” she mused. “It didn’t necessarily occur to me that that kind of ritual [for women] is on the periphery of the Conservative movement. It would have been much lonelier to practice that way without my mom doing that.”

Rabbi Debra Newman Kamin is among the minority of women who serve in Conservative pulpits. She’s been spiritual leader of the 400-household congregation Am Yisrael in Northfield, Illinois, since the oldest of her three children, Shai, now 26, was 6 months old. It was her first job straight out of JTS in 1990.

The position afforded her a 12-minute commute and the flexibility to see her children off to school in the morning and often to pick them up in the afternoon, working from home. She did acknowledge the very personal impact being a pulpit rabbi may have on children, though not one she viewed negatively. “They benefit from being part of a community. The pulpit is such a lifestyle. There was an expectation that we went as a family on Shabbat, but my congregation did not put a lot of pressure on my children to fit a certain mold. On the contrary, they received a lot of positive attention and warmth.”

Brothers Zachary and Shai Kamin weighed in about their experience as “preacher’s kids.” As youngsters, they did feel some of the classic effects of being under the microscope, conscious of not wanting to misbehave or do anything to embarrass their mother on the bimah. But, they took her authority within the congregation for granted. Shai recalled: “I learned when I was older that people left shuls because of a woman on the bimah. My experience was that she was just the rabbi.”

Once adolescence approached, the two felt free to pursue their own interests and ambitions. Zachary, 24, “agnostic from middle school on,” describes himself as more a cultural than an observant Jew, and feels most at home in progressive Jewish communities. During college at Dart-mouth, he was active in the campus chapters of J-Street, which was very engaged in Israeli politics, and Hillel. He reported: “There was never a point at which my mom was not supportive of my path. I think that her biggest influence on me is her feminism and progressive mindset. My social justice lens is connected to her being an early Conservative Jewish woman rabbi, pushing the progressive boundaries inside and outside of Judaism.” 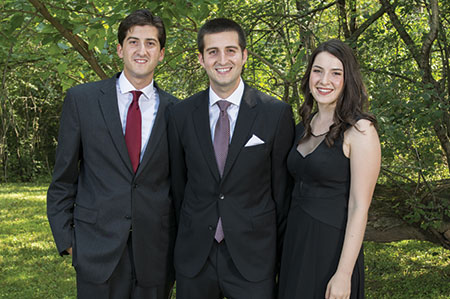 Shai, who gravitated to Yale for “its amazing Jewish life,” concurred. “In terms of feminism, egalitarianism, my mom had a huge influence on me. I am not comfortable in spaces that don’t allow women to read Torah, lead services or have separate seating.” In 2014-15, as a Dorot Fellow in Jerusalem, Shai volunteered with Peace Players International, which builds relationships between Israeli and Palestinian youth through basketball.

Of the three Kamin siblings, Shai has given the most thought to following his mother into the rabbinate. But after two years living in Israel, he’s decided that for the present, he’s more suited to lay leadership. He and his wife plan to resettle in Los Angeles.

“Nothing of mom’s experience dissuaded me from the pulpit, but it was more my personality. I’m more bookish than she is; that’s not a negative, but I was more attracted to the academic side of Judaism.”