You are here: Home » New Outlook » Profile » Discovering the Incredible 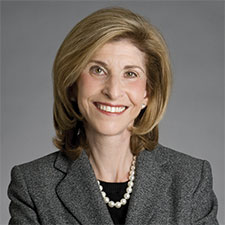 Paula Apsell is particularly happy when her love of science and her love of Judaism come together. So one of her latest projects as Senior Executive Producer of PBS’s NOVA is making her very happy indeed.

NOVA, the most popular science series on American television and online, has done many programs on archaeology, including archaeology in Israel where it is almost the national hobby.

Paula’s team was preparing a show on excavations at a destroyed synagogue in the Lithuanian city of Vilnius. Also known as Vilna, the city had been called the Jerusalem of Lithuania before the destruction of Eastern European Jewry. Even though the upper stories had been shattered by the Nazis, much of the synagogue remained intact as it had been built below ground (since no synagogue could be taller than the local churches). Archaeologists Richard Freund from the University of Hartford and Jon Seligman from the Israel Antiquities Authority hoped that it would contain many historic gems. Not far away, there is a mass execution site where the Nazis shot most of the city’s Jewish population, 70,000 people, as well as 30,000 others. For years, stories persisted of a tunnel through which a handful of Jews escaped, but efforts to document the escape had always proven unsuccessful. In 2016, a team led by Dr. Freund using electrical resistivity tomography and ground penetrating radar, finally found proof of the tunnel’s existence.

This was the type of discovery that Paula Apsell finds fascinating, and which she is in the lucky position to do something about. As NOVA’s Senior Executive Producer, she makes the final decisions on which 20-plus science programs will be on NOVA each year and supervises their production. The Vilnius excavation story was one she wanted to be involved in first hand and traveled with the crew from the Lone Wolf Documentary Group to conduct some of the key interviews. It will be broadcast on PBS around Yom HaShoah in 2017. NOVA had exclusive access to the expedition and excavation, which will be the subject of a new film slated to air on PBS in 2017.

Starting out at WGBH Boston, Paula has been in broadcasting since she graduated from Brandeis University, joining WGBH’s NOVA in 1975, and taking over the reins in 1985. Under her direction, NOVA has won every major broadcasting award and in 1998, was the first to receive the Public Service Award from the National Science Foundation. She also has received many individual awards for her work, including the Carl Sagan Award given by the Council of Scientific Society Presidents.

Paula, who was raised in Marblehead, Massachusetts, now lives in Newton with her husband, Sheldon, an inventor. They have two daughters, one a physician and the other a television news producer. She has been a member of the sisterhood of Temple Emanuel, in Newton Centre, Massachusetts, for decades. Describing herself as a “regular Conservative Jew” who is devoted to Judaism and to Jewish culture, Temple Emanuel is central to her life. She was a vice president and board member for several years, chaired the synagogue’s Youth Committee, and co-founded and chaired an “empty nesters” social group called Kesharim.

So next time you tune into NOVA, remember that a member of the Women’s League network is behind the scenes ensuring the program’s quality and viewing pleasure! You can watch exclusive video clips and photos of the incredible Vilnius archaeological finds here.