Disproving a Negative: There’s No Such Thing as Jewish Art…  Or Is There? 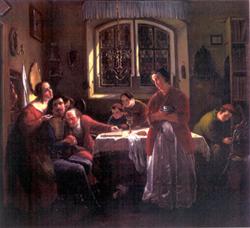 There was a time, not long ago – less than a century – that most Jews believed that there was no such thing as “Jewish art.” The reasoning was that the second commandment: “You shall not make any graven image…” precluded any kind of figurative representation. Scholars maintained that the prohibition against figurative images by the rabbis of the Talmud was taken seriously by the ancients. This contention continued into the early 20th century – perhaps fraying a bit around the edges — despite the rise of Jewish artists like Moritz Oppenheim, Maurycy Gottlieb, Marc Chagall, and others. But these artists represented a new phenomenon – an aspect of secularism and modernity. Art in antiquity was still prohibited by the rabbis, and thus “did not exist.”

Then, in 1932, an archaeological discovery revolutionized notions of Jewish art. During the excavation of the town of Dura on the banks of the Euphrates River (present day Syria), archaeologists uncovered the incredibly well preserved remains of a synagogue from the third century CE, its entire interior decorated with lavish biblical murals. The discovery of the synagogue at Dura Europos, followed by many more, upended the prevailing assumptions about how Jews in the ancient world regarded pictorial representation.

Ever since the discovery of Dura Europos, the study of Jewish art has become a serious discipline within the field of Jewish cultural history.

In keeping with the Women’s League and Torah Fund focus on hiddur mitzvah this year, Women’s League is offering Plus and Platinum members of Kol Ishah a unique opportunity to study Jewish art and architecture in two on-line classes featuring magnificent images of many Jewish artifacts and synagogues. Education Director Lisa Kogen, whose doctoral work focused on Jewish art, will be the instructor.

When Cultures Collide: The Architecture and History of the Synagogue

We will look at a number of historic synagogues from different times, lands and cultures to see what makes a synagogue a synagogue, what is uniquely Jewish and what is adapted from the surrounding culture.

Not an Embarrassment of Riches: Jewish Artisans and Their Art

We will view a variety of illuminated manuscripts, ritual objects, paintings, and other cultural artifacts to understand the prohibition against graven images throughout history.