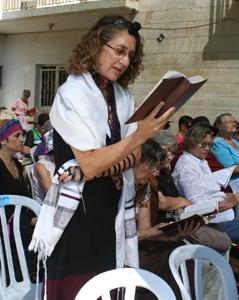 Every year more and more women make their way to Jerusalem for the incredibly full day of learning sponsored by Women’s League for Conservative Judaism in cooperation with the Schechter Institute, the Masorti Movement, Jewish Federation of Chicago, and the Dorot Foundation. This year, some 400 women attended the national event held at the Schechter Institute on June 17.

Nomi, a young mother carrying her 6-week old baby, brought tears to many in the crowd of over 300 women at the 12th Annual National Masorti Women’s Study Day, held in memory of her mother, Polly Eisenberg, z”l. Polly was a member of Kehilah Magen Avraham in Omer, and a long-time member of the planning committee for the study day.

This year’s theme, Circles, Cycles and Change, focused on changes facing women through the ages. Rabbi David Golinkin discussed women’s religious status from1845-2011. Prof. Alice Shalvi, the study day’s inspiration and mentor, dealt with women’s responses to authoritarian rule over the course of history. Among the well wishers were Yizhar Hess, executive director of the Masorti movement, and former Women’s League President Janet Tobin, who is currently president of MERCAZ. A co-founder of the study day, Janet presented the annual Women’s League donations to the kehillot. 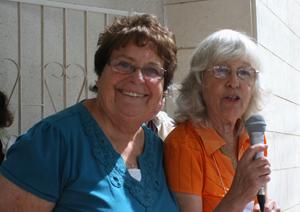 “A breath of fresh air” said Yulia Kalika, a first-time attendee from Kehilat Nezach Israel, in Ashkelon. “It was absolutely wonderful and I am going to come to every study day.” Yulia was able to take classes in Russian along with women from project Kesher. In a particularly moving moment, Valentina Tomila, who had left her village on the Lebanese border at 3:30 am, presented Alice Shalvi with a huge bouquet of flowers. Valentina is the first graduate of the Alice Shalvi Jewish Learning Center.

Lesley Sachs, director of project Kesher, explained why the learning center was named for Prof. Shalvi. “Alice’s life, her stand for feminism, and her activism and tikun olam all embody the spirit of the Kesher project which educates hundreds of Russian-speaking women about their Jewish heritage through texts and advocates for them to take active roles in their homes and in society.”

In addition to Hebrew and Russian, classes were taught in Spanish. 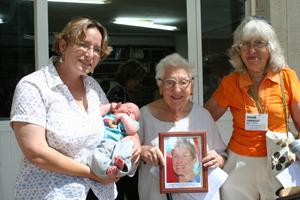 The study day committee of 120 women, under the direction of Women’s League’s Israel Liaison Diane Friedgut, represents nearly all the Masorti kehillot in the country. According to Diane, they are the magic behind the success of this annual event. The entire Masorti movement will be acknowledging Diane’s outstanding devotion and the enthusiasm with which she nurtured the program over the past 12 years with the Yakir HaTnuah award at the 35th anniversary celebration of the Masorti movement next January.