You are here: Home » News » Cory Schneider Reflects on the World Zionist Congress

I have just returned from a fascinating week as part of the Mercaz delegation to the 36th World Zionist Congress in Jerusalem. There were 758 delegates from the Knesset, the world’s Jewish communities and international Jewish organizations, plus alternates and observers. Between the delegates (74), alternates and observers, we were a group of over 130 people from approximately 20 countries. Mercaz (the Zionist arm of the Conservative/Masorti movement) formed a coalition with the Kadima Party, making it the second largest coalition at the congress.

The process of passing resolutions and electing people to leadership positions is the official business of the congress. The process is convoluted, confusing and complicated; I certainly don’t understand it all. Before the congress, delegates were divided into eight committees, and each committee dealt with resolutions in a specific area.

During the orientation, the Mercaz delegates and alternates met in their assigned committees review and decide on their support of the resolutions. Since we are in a coalition with Kadima, the head of each Mercaz committee then met with the head of the corresponding Kadima committee to negotiate how to support resolutions where there was disagreement between the two factions. It was important that our entire coalition (numbering more than 250) vote as a block. Then, during the congress, each full committee meets and considers each resolution in its area. (The resolutions are proposed by the various factions who make up the WZO.) The chairmanship of each committee is a powerful position since his or her ruling is all powerful (not necessarily agreeing with Robert’s Rules of Order). If the vote of a committee defeats a resolution, it is dead. If it is passed, it is brought to the entire delegation for an up or down vote with no discussion (except… but that’s another story!).

Personally, I was very excited to lead the Mercaz delegation in Committee #8 dealing with constitutional issues. This meant I was the negotiator with our Committee #8 partner in Kadima and was one of the lead voices at the full committee meeting during the congress.

The Conservative/Masorti movement did very well. Almost every resolution of which we were in favor was passed including resolutions in favor of pluralism, and for providing funding for our youth in Israel, and against current Israel conversion policies. Mercaz/Masorti came away with more representation in leadership than ever before, with two seats on the inner executive (the most powerful body of WZO), one of whom is the new deputy chair, Dr. David Breakstone.

We were addressed by the leader of the opposition, Tzipi Livni, President Shimon Peres, Mayor of Jerusalem Nir Barkat, and Jewish Agency Chair Natan Sharansky were among those who addressed us. Unfortunately, there were many disagreements and not such nice or respectful behavior. Name calling and near brawls on the part of some of the delegates were controlled by those presiding, although at one point there was a call for security.

I had the opportunity to visit the Ramot Zion Masorti kehillah in French Hill, Jerusalem, Which does wonderful outreach in their neighborhood with an after school program for parents and children ages 3-7. We took a field trip to Herod’s Palace and the Bar Kochba-era water tunnels.

There was also lots of networking with other leaders from around the world. We shared concerns, learned about each other, and, at times, agreed to disagree. Of course, we had great food (kosher McDonald hamburgers are amazing) and I particularly enjoyed being together with Women’s League board members Sandy Blumenthal, Barbara Ezring, Judy Horowitz, Gloria Landy, Carol Simon, and Rita Wertlieb, as well as past presidents Gloria Cohen, Evelyn Seelig, and Janet Tobin.

Some say the WZO is on the brink of oblivion, an irrelevant relic from a bygone era. However, an article that appeared in the Jerusalem Post said: “For all its faults – which are numerous and run deep – the WZO has suddenly been revealed as the only forum in which the entire spectrum of Jewish organized life, across oceans, cultures and ideologies, can meet and talk.” From my own first-hand experience, I agree.

Following the congress, some of us had the extreme pleasure of attending the 11th national Masorti Women’s Study Day at the Schechter Institute. Organized so ably by our Israel liaison, Diane Friedgut, this year’s study day was the biggest ever with almost 400 women in attendance. The theme, A Woman Builds: Building a Better Self, Community & Nation, was covered in 24 seminars, each taught by the finest teachers. Interesting, provocative, stimulating are all words describing these sessions. The day began with shacharit and an introductory address by Professor Alice Shalvi. It ended with a luncheon and my distributing checks from Women’s League to the various kehillot. A feeling of warmth and friendship permeated the entire day. Women’s League is grateful to Diane for all she has done to build such a wonderful community among the Masorti women in Israel.

What a week! Discussions, learning, friendship, networking, disagreement, acquiring new skills – these are just some of the experiences I had. My thanks to all of you for allowing me this opportunity to represent Women’s League! 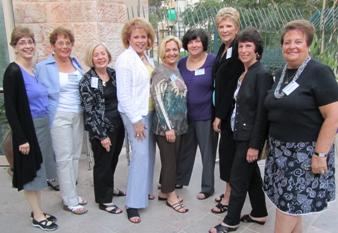 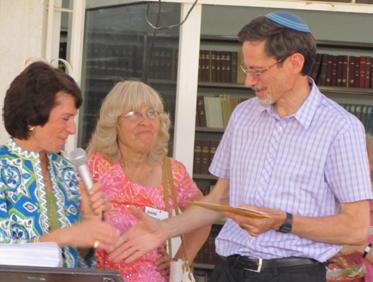 Cory Schneider and Diane Friedgut presenting Rabbi David Golinkin, president of the Schechter Institute, with a check from Women’s League.